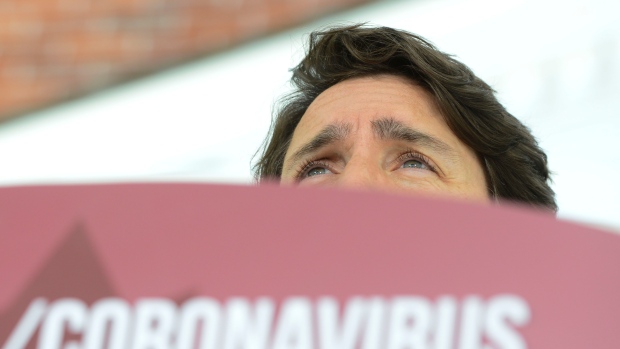 Prime Minister Justin Trudeau sports a fresh haircut as he holds a press conference from Rideau Cottage amid the COVID-19 pandemic in Ottawa on Tuesday, June 16, 2020. THE CANADIAN PRESS/Sean Kilpatrick

OTTAWA - As the country enters its 13th week since the COVID-19 pandemic clamped down hard on the Canadian economy, Prime Minister Justin Trudeau concedes it's time the country gets a better look at the state of the federal government's finances.

But he is also managing expectations, saying this peek into the federal balance sheet will not satisfy opposition parties' calls for a full economic update.

Instead, Trudeau is promising to deliver a “snapshot” of the federal finances in the House of Commons July 8.

“I think it will be useful for people to see the scale and the details on everything we have put out,” Trudeau said during a press conference in front of his Rideau Cottage residence Wednesday.

The Liberals had scheduled the release of the 2020 federal budget in March but postponed it indefinitely when public health officials began placing restrictions on public gatherings due to COVID-19.

Since then, the Trudeau government has faced growing calls to release plans for an economic and fiscal update.

“I've consistently said an economic and fiscal update would be unrealistic right now because it automatically includes projections for a year, three years, five years ahead of time which, quite frankly, we couldn't make any responsible predictions about it,” Trudeau said Wednesday.

That's why he is warning the financial details to be delivered in July will not be a full economic update, but rather a slimmed-down version, detailing government spending measures that have been rolled out so far during the pandemic with some short-term spending estimates.

Every two weeks, the Liberals have updated the Commons finance committee on the emergency COVID-19 spending measures and those reports will form the basis of what will be presented July 8, he explained.

“We will gather all that together along with a sense of where we are, comparisons to where we are compared other countries, and some estimates on where we could be in the coming months,” Trudeau said.

“But this will not be an economic update, it will be more of a snapshot or a portrait of where we are right now.”

Revenues have plunged and expenses have soared: millions of workers stopped earning incomes as their workplaces shut down and started collecting benefits instead. That's sent estimates of the federal deficit into orbit, to $250 billion or more.

Trudeau said the situation demanded the biggest government response in our lifetimes.

Bloc Quebecois Leader Yves-Francois Blanchet accused the Liberals of waiting until the middle of summer to release the fiscal “snapshot” at a time Canadians are less likely to be paying attention.

“I think it is quite another lack of respect for Parliament,” he told reporters Wednesday.

He accused Trudeau of acting like a “king” by not supporting requests to allow Parliament to continue operating normally through the summer in a hybrid format - with some MPs taking part in proceedings in the House of Commons chamber and some participating virtually - to improve the emergency aid programs.

“I know Canada is a monarchy, but I didn't know it had an actual king - and somebody who decides everything and makes a show of it on a daily basis and does not answer to Parliament does look like a monarchy,” Blanchet said.

Trudeau reacted by saying the Bloc Quebecois and the Conservatives may be upset their attempts to get Parliament to resume full sittings over the summer didn't win majority support in the Commons, but this doesn't mean the country is suddenly being run by dictatorship.

As for when there will be a full fiscal update and budget, Trudeau said the government is “still very much responding to an immediate situation.”

“We will continue to reflect on when that time could be right as the situation stabilizes.”

This report by The Canadian Press was first published June 17, 2020.