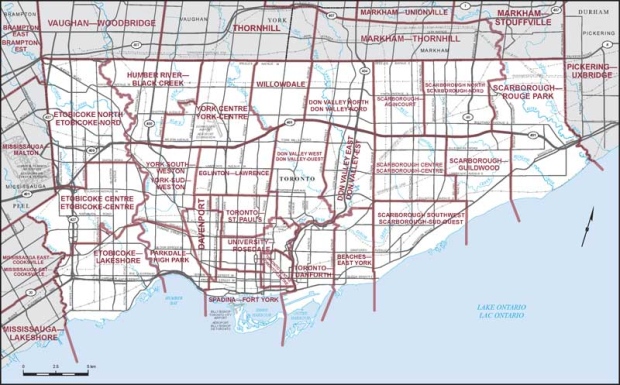 While candidates in ridings across the GTA are swinging into full campaign mode, a handful of races promise to be particular nail biters in 2015. Here’s a look at some of those ridings in Toronto and across the GTA and why it’s unlikely we’ll be able to spot the winner before election night.

A mere 26 votes separated current Conservative MP Ted Opitz from three-time Liberal incumbent Borys Wrzesnewskyj on election night in 2011. A 2012 Supreme Court decision ruled the margin of victory for Opitz to in fact be a razor-thin six votes. The two are set to square off in a rematch, though Opitz will enjoy an incumbent’s advantage this time.

Snatched up by the NDP in 2011’s “Orange Crush,” the riding had been held by the Liberals since 1997. Having dropped to third place in the last election, the Liberals are trying to win back the riding with a star candidate, former Toronto police chief Bill Blair. Despite his star power, Blair will likely face a tough fight from NDP incumbent Dan Harris, as well as Green Party candidate Tommy Taylor, a 34-year-old theatre artist who was detained during the G20 and is likely to blast Blair on his handling of the mass detentions.

Former Toronto District School Board Chair Shaun Chen is running for the Liberals to try and unseat NDP MP Rathika Sitsabaiesan in the new riding. While Sitsabaiesan defeated her nearest rival in Scarborough—Rouge River by a comfortable 10 per cent margin in 2011, redistributed results for the new riding show that she would have claimed a narrow victory over the Conservatives if the riding boundaries had been the same in the last election. Businesswoman Ravi Malhi will be trying to narrow the gap for the Conservatives.

Two high-profile candidates who have both represented parts of the area for years will be duking it out. Former city councilor and current MP Adam Vaughan will be going to bat for the Liberals. He’s likely to face stiff opposition in the form of NDP candidate Olivia Chow, who served as an MP for part of the area for years before stepping down to launch an unsuccessful mayoral bid last year. While a swath of the riding Chow once held – including a portion of China Town and Grange park – are not part of the new riding, the redistributed results from the 2011 election show that the NDP would still have won by a handy margin if the boundaries had been the same.

The battle for Spadina-Fort York might not say much about the fate of the Conservatives, but it could provide some insight into which opposition party will emerge as the alternative of choice.

The longtime Liberal riding was won by Chrystia Freeland in a byelection after former interim Liberal Leader Bob Rae stepped down in 2013. However in 2015, Freeland is running in the newly created riding of University-Rosedale. That leaves Liberal candidate Bill Morneau to run against star NDP candidate Linda McQuaig, who is taking another run at the riding after losing the2013 byelection to Freeland.

High-profile Liberal MP Chrystia Freeland is up against former TV personality Jennifer Hollett, who is running for the NDP in a contest for the newly created riding. Redistributed results indicate the NDP would have run the riding if it had existed in 2011.

Conservative incumbent Mark Adler is looking to hang on to his seat after knocking off Liberal incumbent Ken Dryden in 2011 in a major upset for the Liberals. The grits are running businessman Michael Levitt in an effort to win back the riding.

Conservative Chris Alexander is up against Mark Holland, a three-time Liberal incumbent he knocked off in 2011. Holland is trying to reclaim a seat in the newly formed Ajax riding but Alexander has had the advantage of being an incumbent with a high profile as immigration and citizenship minister.

Another rematch is set to take place in Mississauga East-Cooksville, where the Conservatives snatched the riding away from Liberals for the first time ever in 2011, when current MP Wladyslaw Lizon defeated Liberal Peter Fonseca by less than 700 votes. Fonseca has returned to run for the Liberals in the current election and is hoping to claim the seat that narrowly eluded him four years ago.

The riding went from red to blue in 2011, but in 2015 the Conservative candidate who helped do it, MP Costas Menegakis, is running in the new riding of Aurora-Oak Ridges-Richmond Hill. So the Conservatives are running business man Michael Parsa to try and hold the riding, while the Liberals are running consultant Majid Jowhari to try and take it back. Adam Devita is running in the riding for NDP.

A longtime Liberal stronghold that turned blue for the Conservatives in 2011, the riding is currently held by Finance Minister Joe Oliver. It was also the focus of a bitter nomination contest for the Liberals in which former Conservative turncoat Eve Adams eventually lost to lawyer Marco Mendicino. Area liberals expressed concern at the time of the contest that the infighting around Adams’ candidacy could hurt the party’s chances in the riding in the election. The NDP also announced Aug. 14 that they would run former Saskatchewan finance minister Andrew Thomson in the riding, saying they would take his economic record over that of Stephen Harper any day.