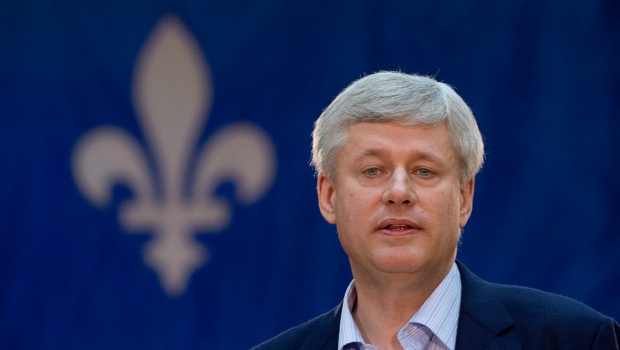 Harper says the buildup of equipment and manpower, in an apparent bid to prop up the regime of Syrian President Bashar Assad, is likely to inflame an already volatile, bloody civil war.

"The Russian government and (President Vladimir) Putin remains a government that complicates, in dangerous and unhelpful ways, security situations all over the world," Harper said at a campaign stop in Victoriaville, Que.

The comments come as Moscow urges Washington to avoid "unintended incidents" by restarting direct military dialogue, suspended in the wake of Russia's annexation of Crimea.

Canada is part of the U.S.-led coalition that's bombing Islamic State militant positions inside Syria -- missions which the Harper government has insisted have skirted the Assad regime's air defences.

But there have been unconfirmed reports that Russian planes have started flying support missions. And this week, published reports in the region claimed Russian combat troops had accompanied Syrians into the field for limited operations.

The chances that western forces could bump up against their former Cold War adversaries is of growing concern, pariticularly if the Syrians obtain updated anti-aircraft missiles and radar.

The build is coming after Assad's forces suffered a string of defeats on the battlefield. At a news conference Friday, Russian Foreign Minister Sergei Lavrov didn't comment on the published reports except to say his country was sending equipment to help Assad fight Islamic State. Russian troops were teaching Syrian soldiers how to use the gear, he said.

Harper said Putin is exerting the same kind of disruptive influence as he does in Ukraine, where Russia backs an insurgency in eastern regions.

"There has got to be some kind of political settlement in Syria that involves moderate elements of both sides, but simply sending military support into Assad is not in our judgment helpful, but is it consistent."

A former senior United Nations official, Mokhtar Lamani, also suggested in a published report Friday that the west needs to end the civil war in Syria if it wants to end the refugee crisis.

The war in Iraq and Syria cannot be won with western ground troops; local forces must be willing to shoulder the burden of securing their own territory on an ongoing basis, the prime minister noted.

"That's why so much of our efforts in Afghanistan were about building up their armed forces and their police and security agencies. That's why we are in the north of Iraq, we were actually working with very closely and helping to train people who are actually effectively fighting ISIS in those regions," he said.

"The fact that there remains a lack of that capacity is obviously a significant challenge, but in the meantime it is important that we continue the air campaign against ISIS and make sure that they are put under pressure and not able to spend all of their time planning attacks against us in Canada and the rest of the West."

The Liberals have said they would also discontinue the bombing canpaign, but maintain and possbly bulk up the training mission.

In an obvious shot at Mulcair, Trudeau said Canada has a responsibilities in a crisis with such broad geopolitical repercussions as the one in Iraq and Syria.

"That's why we have to be, as Canada has always been, a sound and valuable partner in the fight to stabilize this region," Trudeau said in Vancouver.

"That means continuing to work with international partners and pushing back against ISIS, that means stepping up our refugee and humanitarian support and continuing to make sure that we are increasing and helping stabilize a very dangerous region and not just standing by and doing nothing."