Fahmy says Canada must do more for citizens detained abroad 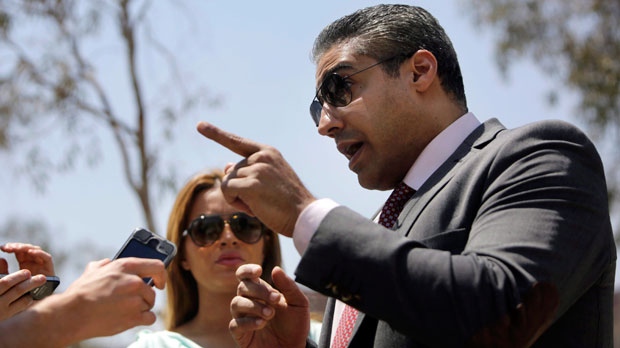 In the midst of a heated federal election campaign, a Canadian journalist who fought terror charges in Egypt for nearly two years will be returning to Canada with a clear message for all parties vying to form the next government -- Ottawa needs to do more to help citizens detained abroad.

Mohamed Fahmy maintains he doesn't want to get too political, but he does want to trigger a national conversation on the issue when he arrives in Toronto in the coming days.

"I will start a constructive debate about the Canadian government's handling of the case and how foreign policy in dealing with such emergencies could be improved to protect Canadians who could be in a similar situation like mine, or worse," he told The Canadian Press in an interview.

"Our trial should be a case study that could benefit so many."

Fahmy's points are likely to be heard by at least a few figures of note. The 41-year-old plans to accept invitations he's received to meet separately with NDP Leader Tom Mulcair and Liberal Leader Justin Trudeau following his return to Canada.

"I'm not endorsing or pledging allegiance to anyone," he said. "But these two parties and these two leaders -- I really want to meet them in person and thank them, because they stood beside me very much so when I needed the support."

The NDP said Sunday that it already had plans, if elected, to bring in legislation aimed at protecting Canadians abroad.

"An NDP government will enact legislation to ensure consistent and non-discriminatory provision of consular services to all Canadians abroad," a party spokesman said.

An arduous legal battle involving two trials and a year in prison for Fahmy finally came to an end when he was abruptly pardoned by Egypt's president just over a week ago.

Fahmy said Mulcair and Trudeau appealed to Prime Minister Stephen Harper and his Conservative government when he needed it the most, particularly during a brief period when, while out on bail in Cairo during his second trial, he was left without a Canadian passport.

"(Harper's) response was unacceptable, considering the security threat I was facing," Fahmy said of the situation at the time.

While thankful for the efforts of the Canadian ambassador and consular staff in Cairo, Fahmy expressed his disappointment with what he suggested were very "mild" efforts by Ottawa to secure his release.

"If the Conservative government even begins to take credit for my pardon, then they are extremely mistaken," Fahmy said, crediting his release to the efforts of his wife, his lawyers, and the support he received from Canadians and others around the world.

The Conservative government, however, has said it consistently called at the highest level for Fahmy's release.

For the past week, Fahmy has remained in Egypt, readjusting to freedom, speaking about his experiences and waiting to get his name removed from a no-fly list -- a bureaucratic hurdle that he fully expects to clear.

He will soon be leaving the country and stopping first in London. There he will meet with his high-profile lawyer, Amal Clooney, and take part in a few speaking engagements before heading to Toronto, where there will also be public appearances.

At all the events he plans to participate in, Fahmy said he plans to thank his many supporters, openly talk about the lessons learned from his ordeal and continue to urge Egypt to issue pardons to his Al Jazeera colleagues who remain convicted in absentia.

"I think our trial was very unique in the sense that it involved so many current affairs issues such as identity, the war on terrorism, how it's being used to clamp down on civil liberties and press freedoms and geopolitics of the Middle East," he said.

"I will be thanking so many Canadians who supported this stranger they haven't met for almost two years and contributed to freeing me."