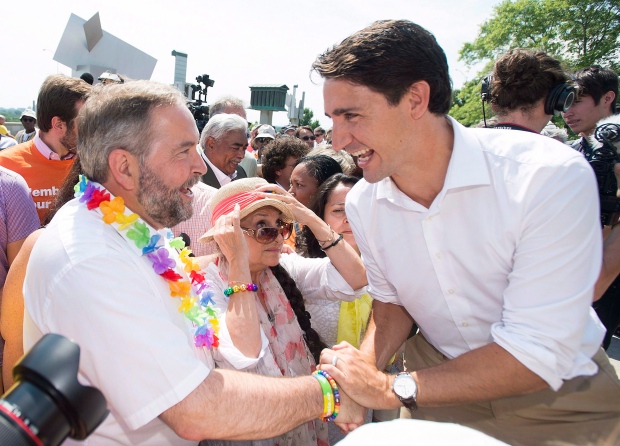 "A lot of people say to me that they will support the party they think can most effectively take on the Conservatives," Freeland, a Liberal incumbent, said of her battle in the new University-Rosedale riding.

New Democrat Mira Oreck has heard it too, in the new downtown riding of Vancouver Granville on the opposite side of the country.

"There's an overwhelming feeling of people wanting change -- no question about it," said the first-time candidate, adding she's been surprised by "how many people were, for the first time, willing to let go of their allegiances to one party or another that they've had for 20 or 30 years."

After five weeks of campaigning and with the Labour Day weekend signalling the start of the real race to Canada's Oct. 19 federal election, a variety of national public opinion surveys show a tight, NDP-Conservative-Liberal field that's essentially a dead heat. Or is that an NDP-Liberal-Conservative field?

The 1-2-3 party placings -- sometimes with barely the poll's margin of error between first and third -- are taking on exaggerated significance as the three major federal parties all jockey with a real shot at power.

It's a first for a Canadian general election and the new dynamic is confounding handicappers everywhere, from polling and press offices to voters on the hustings.

"I sense a greater level of volatility -- potential for volatility -- in this election than ever before," said David Coletto of Abacus Data, whose latest survey has the Conservatives at 30 per cent nationally, smack dab between the NDP (31 per cent) and the Liberals (28 per cent).

That same Abacus online panel survey found 24 per cent "undecided," a number that jumped to 70 per cent when respondents were asked if they might change their mind.

Responses on who Canadians think will win the election are also changing from month to month.

Coletto suggests there are actually two separate elections taking place. One includes the 40 per cent or so of voters who say they'll at least consider voting to keep Stephen Harper's Conservatives in office; the other is taking place among the 60 per cent of respondents who say they absolutely want a change of government.

The volatility stems from the large pool of voters who say they're open to voting either NDP or Liberal, depending on who they perceive to be most likely to defeat a Conservative, says pollster Nic Nanos of Nanos Research, which currently has the NDP (30.8 per cent) fractionally ahead of the Liberals (29.7) and Conservatives (28.8).

Any sense of momentum in the campaign's final days could be self-fulfilling.

"That's the wild card in this election," said Nanos.

"In the past we've never really seen this level of cross-over between those two parties, a lot of it having to do with the success of the New Democrats."

Pollsters agree the Conservatives, nationally, have the most rock solid base of support. Fully two thirds of Conservative backers in Nanos's most recent telephone poll said they're considering only one party. That drops to barely 40 per cent for Liberal leaners and 37 per cent of NDP supporters.

But rock-ribbed Conservatives "can only get so much comfort from that," said Nanos, because the party's room for growth also appears limited.

"It would be hard for them to have an absolutely disastrous campaign, but it would also be difficult for them to win a majority."

The Liberals, he said, "made a radical decision to shake up the dialogue by outflanking (the NDP) on the left. My hope is that also shakes off some of that 'blue' Liberal support that's helpful to us in the 905, 416," area codes of the greater Toronto area.

"I've said there will be two distinct campaigns: the pre-Labour Day and post-Labour Day," added O'Toole. "There could also be people making decisions in that final week based on what they've seen."

If Liberal-Conservative cross-pollination is in the wind, pollsters aren't yet picking it up. Call them promiscuous progressives, hardcore Harper haters or simply party shoppers worn out by seven years of economic malaise, but surveys keep pointing to a big pool of disgruntled Anybody-But-Conservative tire-kickers. How that pool splits will decide the makeup of the next Parliament.

"It would not surprise me if we see a lot more last-minute shoppers," this election, said Nanos.