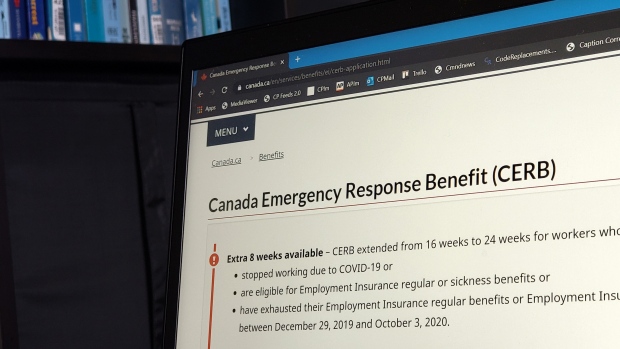 The landing page for the Canada Emergency Response Benefit is seen in Toronto, Monday, Aug. 10, 2020. THE CANADIAN PRESS/Giordano Ciampini

OTTAWA - Newly released data on emergency COVID-19 aid shows that some of the country's highest income earners used a key benefit for workers.

The $2,000-a-month Canada Emergency Response Benefit paid out just over $81.6 billion in benefits to 8.9 million people from March until it ended at the start of October.

The CERB was available to anyone who had made at least $5,000 in the preceding 12 months, and whose income crashed because of the pandemic, either from a drop in hours or being unable to work.

It was predominantly used by people who earned under $47,630 in 2019, figures from the Canada Revenue Agency show, but those higher up the income ladder also applied for the aid program.