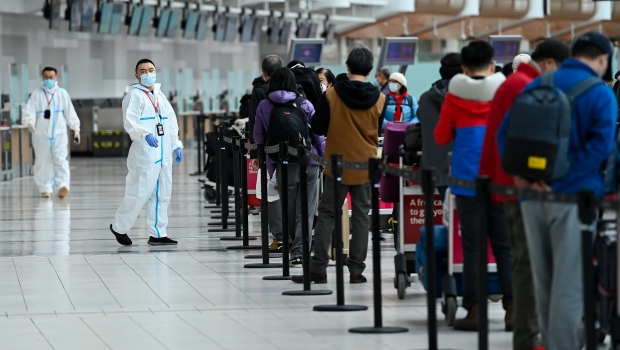 People line up and check in for an international flight at Pearson International airport during the COVID-19 pandemic in Toronto on Wednesday, Oct. 14, 2020. THE CANADIAN PRESS/Nathan Denette

OTTAWA - The federal government is increasing the fine for air travellers who refuse to quarantine in a designated hotel for three days after arriving in Canada.

Travellers who had faced a $3,000 fine if they didn't abide by the requirement will instead be liable for a $5,000 penalty starting on Thursday.

The move comes a week after a federal advisory panel raised a number of problems with the hotel quarantine and recommended the government end it.

The panel instead suggested travellers be required to quarantine in a hotel only if they fail to present a credible quarantine plan.

Conservative health critic Michelle Rempel Garner referenced the panel's recommendation in the House of Commons on Thursday as she asked whether the Liberal government would let the quarantine requirement expire on June 21.

“In spite of repeated requests, the Liberals have never produced evidence to show that their hotel quarantine program stops the spread of COVID over other measures,” Rempel Garner said during question period.

“However, there is evidence of COVID-19 outbreaks at these facilities and there's also evidence of sexual assaults occurring there.”

Police have arrested at least two men accused of sexual assault related to quarantine measures, one at a Montreal hotel and another tied to a compliance check in Oakville, Ont.

Health Minister Patty Hajdu declined to say whether the quarantine requirement would be extended.

“We will make sure that whatever we do next on the border will be through the lens of science and evidence, and in full partnership with provinces and territories,” Hajdu said in response to Rempel Garner's question.

As of May 24, 1,091 people have been ticketed for not complying with hotel quarantine since the rules came into effect in February.

The quarantine requirement has been criticized for several reasons, including whether it actually prevents the spread of COVID-19 and concerns many air travellers are avoiding the requirement by flying into the U.S. and driving into Canada.