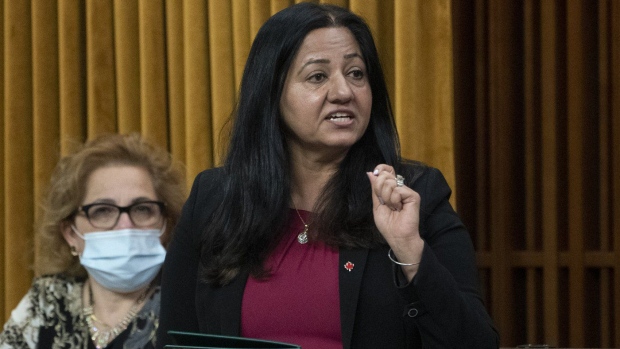 Liberal MP Sonia Sidhu rises in the House of Commons on Wednesday, June 1, 2022 in Ottawa. The federal government is expected to table a plan to improve access to diabetes treatment and prevention in Canada. Sidhu called for the new framework as part of a private member's bill that received royal assent in 2021. THE CANADIAN PRESS/Adrian Wyld

OTTAWA - The federal government has tabled a long-awaited plan in the House of Commons to improve access to diabetes treatment and prevention in Canada, Health Minister Jean-Yves Duclos announced Wednesday.

Liberal MP Sonia Sidhu called for the framework as part of a private member's bill that became law in 2021.

At the time, Diabetes Canada was clamouring for some kind of national vision to address the growing disease epidemic.

“The framework means that Canada will have a co-ordinated response to diabetes that will improve health outcomes for everyone,” Sidhu said at a press conference alongside the Health minister Wednesday.

Diabetes prevents the natural production or use of insulin in the body, which in turn prevents the regulation of glucose in the blood. It is a major cause of blindness, kidney failure, heart attacks, stroke and lower limb amputation.

According to the private member's bill, the framework must outline the training, education and guidance health workers need to promote the treatment and prevention of diabetes, including new clinical practice guidelines.

The act says the government will ensure the Canada Revenue Agency administers the disability tax credit fairly and in a way that helps as many people with diabetes as possible.

Advocates for diabetes patients have lamented the lack of federal vision on the disease for years.

“There's really the gap of having an overall playbook or framework, and then there (are) gaps in being able to measure progress against that by providing data,” Laura Syron, president of Diabetes Canada, said in an interview Wednesday.

A federal strategy was established in 1999 but then absorbed into a larger strategy to address chronic diseases in 2005.

“The longer we delay co-ordinated efforts with targeted outcomes, the more diabetes prevalence will increase and the more Canadians will experience its tragic complications,” Dr. Jan Hux, then president of Diabetes Canada, said in a statement in 2019.

Since then, the prevalence of diabetes and prediabetes in Canada has grown 6.5 per cent, according to statistics released by Diabetes Canada, and the annual cost of treating the disease has grown to $30 billion.

There were 5.7 million people with diagnosed diabetes as of March 2022 and another five million experiencing prediabetes - a condition that, if left unmanaged, can develop into Type 2 diabetes.

“I'm a person who lives with Type 2 diabetes, so I can tell you with confidence that this framework has the potential to transform the lives of millions of people who live with diabetes like me, and those who care for them,” Syron said at the press conference.

The strategy will serve as a road map for provincial health systems and outline what diabetes treatment and prevention should look like in Canada, she said.

She is particularly interested in a starting a conversation about reducing stigma around diabetes, which research has shown makes people less likely to take their medication and hurts patients' quality of life.

Now that the framework is in place, she said her organization will start pushing the federal government to dedicate funding to it in the next budget.

The government is also speaking with Indigenous groups to address diabetes in First Nations, Inuit, and Metis populations, Duclos said.

“We also know that Indigenous Peoples are diagnosed with diabetes at a younger age, and tend to have more severe symptoms and have more difficulty having access to appropriate health-care services, and therefore face a higher risk of complications and experience poorer treatment outcomes,” Duclos said.

The federal government also funds the Aboriginal Diabetes Initiative to address the outsized risks Indigenous people face from the disease. The initiative aims to deliver primary prevention, screening and treatment programs with the help of First Nations and provincial and territorial governments.