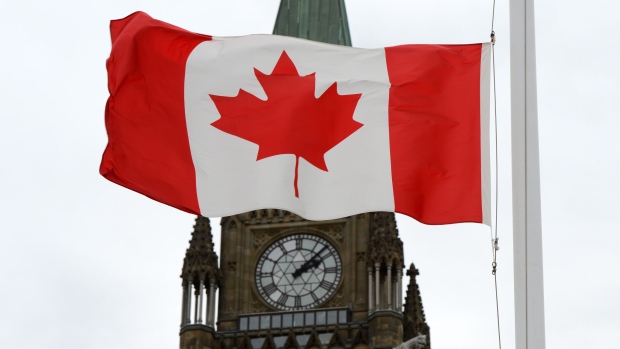 A Canadian flag blows in front of the Peace Tower on Parliament Hill in Ottawa. (The Canadian Press/Sean Kilpatrick)

International Trade Minister Chrystia Freeland stressed that the government's signature on the 12-country treaty essentially means Canada can keep its spot at the bargaining table.

Freeland said she intends to join trade ministers from the TPP's partner countries at a signing event Feb. 4 in Auckland, New Zealand.

"Just as it is too soon to endorse the TPP, it is also too soon to close the door," Freeland wrote Monday in an open letter posted on her department's website.

"Signing does not equal ratifying.... Signing is simply a technical step in the process, allowing the TPP text to be tabled in Parliament for consideration and debate before any final decision is made."

Only a majority vote in the House of Commons would bind Canada to the deal, said Freeland. She has also requested a thorough, transparent study of the agreement by parliamentary committee.

In recent weeks, Freeland conducted public consultations on the wide-ranging accord, which -- if ratified -- would also set new international rules for sectors beyond trade. Those other areas include intellectual property, which worries some experts.

The minister has already indicated the massive accord, which includes major economies such as the United States and Japan, cannot be renegotiated.

It remains unclear whether the government would attempt to carve out side accords to help address concerns. Some legal experts have urged the government to do so.

Asked whether the government could push for side deals, Freeland responded by saying it wouldn't be very wise for her to answer such "hypotheticals."

"As you know, there are a number of side letters already (in the TPP) and one of the things that we will be listening to people about is, you know, what (are) their concerns."

Each country has up to two years to consider ratification before making a final decision.

She has said that while Liberals are strong supporters of trade, she's also noted that they didn't negotiate the Trans-Pacific Partnership.

The former Conservative government announced an agreement-in-principle on the pact in October during the federal election campaign.

At the time, then-prime minister Stephen Harper warned that Canada couldn't afford to let the opportunities afforded by the agreement pass by.

The treaty, which came under heavy criticism in part because the talks took place in secrecy, can take effect if it's ratified by half the participating countries representing 85 per cent of the proposed trade zone's economy.

It remains unclear, however, whether U.S. lawmakers will ratify the accord.

The Canadian auto-workers' union, Unifor, has called the deal disastrous, warning it threatens some 20,000 manufacturing jobs in Canada.

Freeland recently said she heard from groups representing farmers in Alberta and the Port of Vancouver that were very strongly in favour of TPP, a deal that would open up new foreign markets for many Canadian firms.

On the other hand, Freeland also heard concerns from Canadian and U.S. academics at a recent event at the University of Toronto. Several trade experts who addressed the conference criticized the TPP's provisions on intellectual property and warned they would be harmful for Canada.