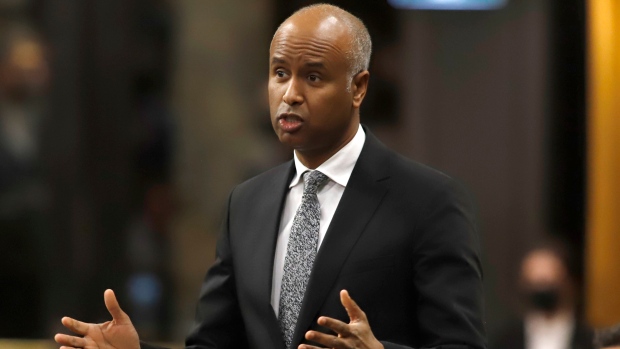 Housing and Diversity and Inclusion Minister Ahmed Hussen rises during question period in the House of Commons on Parliament Hill in Ottawa in Ottawa on Thursday, December 16, 2021. THE CANADIAN PRESS/Patrick Doyle

OTTAWA - The federal government is giving co-operative housing providers millions in funding to ease rental costs, pledging relief for a sector that has sought to find new ways to provide help to tenants.

The $118.2 million over seven years is the second phase of funding for providers whose federal housing agreements expired before April 2016.

The money is expected to help co-operative housing providers support low-income tenants in 18,000 units by reducing their monthly payments.

The funding also creates what Tim Ross, executive director of the Co-operative Housing Federation of Canada, described as long-term support for households who otherwise couldn't afford their rent.

Co-operatives set monthly rents at a level that lets them cover operating costs as well as current and future capital repairs, which still sets rates above what some member tenants can afford.

“There is still a gap in what some households need in order to be affordably housed in a co-op,” Ross said.

He added that the federal funding “helps to fill that gap for the most vulnerable members of co-op housing and non-profit housing communities,” and gives co-operatives a foot in the door to the national housing strategy.

He also said the funding unveiled Thursday will work in tandem with efforts by providers to secure new mortgages on their properties at vastly lower rates than the ones the federal government once charged them.

The 40- and 50-year mortgage agreements were signed in the 1970s and 1980s and came with interest rates of up to 13 per cent, and what Ross described as “killer” pre-payment penalties that “would have made tapping into today's low-interest environment impossible.”

Interest rates have fallen further since the Liberals first flowed money to the sector in 2016 to help pay off the debts and test the private market. That has allowed co-operatives to get lower-cost financing and invest in upgrades to their properties, he said.

But those same rates have also driven up home prices nationally as buyers try to lock in low-interest mortgages amid low supply.

Households added at least $121.5 billion in mortgage debt last year, and Statistics Canada still has to calculate what happened in the final three months of 2021.

The House of Commons finance committee decided this week to hold hearings to determine what specifically is driving up housing prices, as part of a broader look at what is fuelling inflation.

“Answering that question, solving that riddle, will explain why this balloon is inflating so fast and abruptly and allow us to halt the inflation before the balloon bursts altogether, with devastating consequences for families and our overall economy,” Conservative finance critic Pierre Poilievre said at the outset of the committee's meeting on Wednesday.

His NDP counterpart, Daniel Blaikie, added that rising costs were a concern for buyers pre-pandemic, but the affordability crunch has become worse over the last two years.

Hussen on Thursday noted the need to build more supply, pointing to federal, provincial and municipal efforts to speed up construction of new units. He said the government is also looking at a number of options to discourage investors from accumulating a large portfolio of investment properties.

“I have no doubt that our upcoming budget will address some of these pressing concerns that Canadians have,” Hussen said, adding a moment later that he expects the finance committee “to be constructive to help us bring forth ideas and not engage in partisan rhetoric that merely is out of touch with reality.”

All of the measures will be on the agenda later this month when Hussen meets with his provincial and territorial counterparts, followed by what he called a national housing summit.