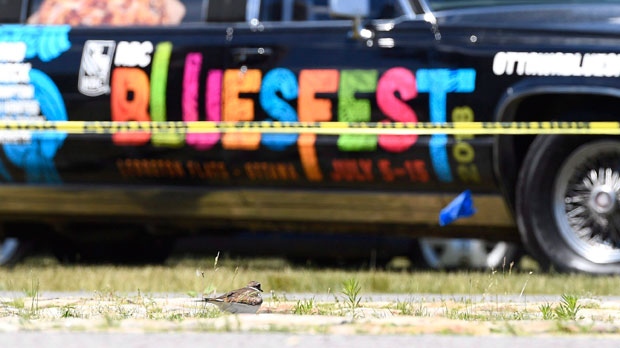 Eggs are seen below a nesting killdeer bird on a cobblestone path on the site of the Ottawa Bluesfest music festival, is seen in front of the festival's promotional limousine, in Ottawa on Monday, June 25, 2018. THE CANADIAN PRESS/Justin Tang

OTTAWA -- A plan hatched by an Ottawa music festival to relocate a tiny plover and its egg-laden nest has received the go-ahead from federal environmental authorities.

Environment and Climate Change Canada said it has issued a permit for Ottawa Bluesfest organizers to move the killdeer and its four eggs to a nearby suitable habitat.

"We're hopefully going to have the nest and the eggs to a safe location by the end of the day," Monahan said, adding that setup work on the stages should start soon.

"It's not ideal, but we have enough time," he said. "We may have to work some extra hours, but we should be fine."

Environment and Climate Change Canada said in a statement Tuesday that the relocation will allow the nest to remain -- and the eggs to hatch -- in a natural environment.

The bird and its eggs -- both of which enjoy protected status in Canada -- were nestled on a cobblestone patch that would normally be directly underneath the main Bluesfest stage.

Workers came across the killdeer last week when they arrived at the festival venue, which is being set up for a July 5 start date.

What the workers described was an agitated bird -- the usual defensive habits of an adult killdeer when a threat or intruder has come too close to its nest.

Organizers put up yellow caution tape in place around the nest site, and the National Capital Commission paid for 24-hour security on ground overseen by the federal agency.

Eggs generally take between 24 and 26 days to hatch, and it is unusual for them not to hatch by mid-June. Killdeer young are able to fly away soon after they are hatched, but there was no way to know whether they would hatch quickly.

Killdeer are not considered a species at risk, although their domestic numbers in Canada have been on the decline over the last four decades.

Still, moving the nest required federal approval, which arrived ahead of a deadline that would have caused a cascade of construction problems for the 11-day festival, which gets underway next week.

Monika Melichar of Woodlands Wildlife Sanctuary in Minden, Ont., some 300 kilometres west of Ottawa, began the painstaking move by placing a replica nest with the eggs inside near the real one.

The mother killdeer flew away at first, but returned a short time later, resting on the replica nest.

"These birds are good -- the parents haven't given up yet," Melichar said.

She will be moving the nest one metre every 20 minutes until it reaches its new home about 30 metres away from where the stage will be located.

Officials said they will cease operations at nightfall and resume the process at about 5 a.m. Wednesday.

But if the mother abandons the eggs, which is a possibility, the eggs will be transported to a facility where they have the best chance of survival.

The nest' new home is far enough away that the birds won't be disturbed by the hundreds of thousands of music fans who will trample through the festival grounds to see the likes of Shawn Mendes, Bryan Adams, Foo Fighters and Dave Matthews Band, among a host of other acts.

"There was a big learning curve, those of us involved with the festival had to quickly get up to speed on what needed to be done, so certainly it's not something we'd like to go through again," Monahan said. "We're all faced with a situation we've never had before."