Female pedestrian seriously injured after being struck by vehicle in Mississauga 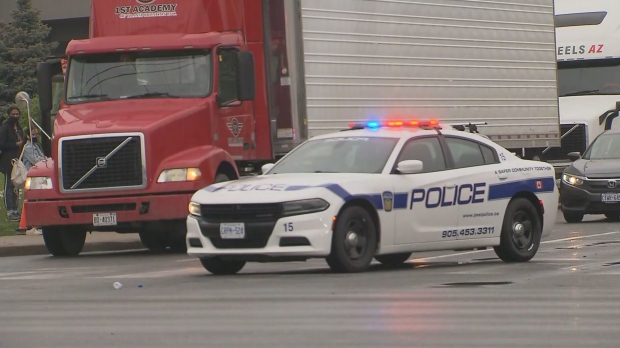 A female pedestrian has serious injuries after being struck by a vehicle in Mississauga Thursday morning.

A female pedestrian has potentially life-threatening injuries after being struck by a vehicle in Mississauga Thursday morning.

Peel police responded to reports of a pedestrian hit by a vehicle in the area of Derry Road East And Edwards Boulevard, at around 5:45 a.m.

A woman was transported to a trauma centre in serious and potentially life-threatening condition, police said.

The driver remained at the scene.

There were road closures in the area but they have since reopened.

UPDATE:
- Adult female being transported to trauma centre with serious injuries
- Unknown at this time if life-threatening or not
- E/B Derry Rd remains open
- W/B lanes from Kennedy Rd have been impacted
- Expect delays in this area during your morning commute