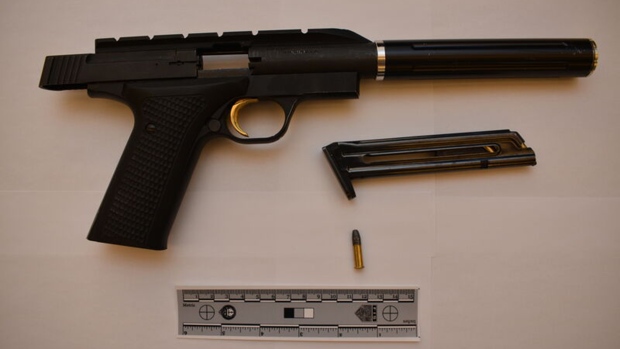 A .22 calibre pistol and silencer is seen in a Toronto police handout image.

Three people are facing a raft of charges after police allegedly seized nearly a kilogram of the deadly opioid fentanyl in downtown Toronto, alongside a stun gun, a pistol with a silencer and a bulletproof vest.

Earlier this month, police observed a number of opioid overdoses in the Jarvis and Charles streets area of the city.

After conducting surveillance in the area, police raided a home nearby and allegedly seized more than 900 grams of fentanyl, 20 grams of cocaine, and 35 grams of crystal meth.

Investigators also allege the suspects armed themselves with a 55,000-volt stun gun, a bulletproof vest, and a .22 calibre semi-automatic pistol with a silencer.

Two men identified as Munthir Salim, 28, and Jama Ismail Mohmamed, 35, as well as a woman identified as Unona Khomich, 19, were each charged with offences including possession for the purpose of trafficking, possession of a prohibited device and careless storage of a firearm.

They each appeared in court at Old City Hall on Feb. 14.

Drugs including fentanyl are seen after a seizure by TPS in February 2021.

A stun gun is shown in a TPS handout image.