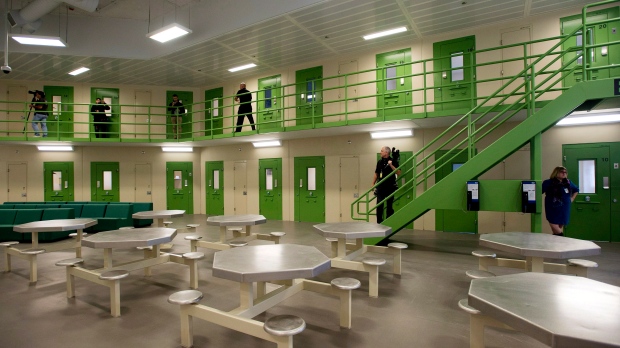 The general inmate facility is shown during a media tour of the Toronto South Detention Centre in Toronto on Thursday, Oct. 3, 2013. The facility is slated to open this fall. THE CANADIAN PRESS/Nathan Denette

TORONTO - Disaffected Ontario correctional officers are pushing for their own union in an increasingly bitter battle to win the hearts and cards of thousands of front-line jail workers.

Backed by a well-heeled Quebec-based labour organization, the raid on the Ontario Public Service Employees Union has laid bare a litany of long-standing grievances and seems destined for a major showdown in the coming months.

Barry Roy, president of the recently formed Ontario Association of Correctional Employees, said a new union in the corrections sector is long overdue given, in his view, OPSEU's many failings.

“I was an OPSEU soldier,” said Roy, a 27-year guard and union activist. “Now, you can't get me to even talk about it without my blood pressure boiling.”

Currently, OPSEU counts about 9,000 officers and related workers in its Correctional Bargaining Unit. The dissident association argues its members have been poorly served by the union, which represents about 170,000 public-sector employees across the province.

Roy, who works at the Ontario Correctional Institute in Brampton, Ont., accuses the OPSEU leadership among other things of being self-serving, cozying up to the provincial government, and intimidating members deemed disloyal.

For its part, union leaders deny doing anything other than look out for the well-being of their members.

“OPSEU has some of the lowest dues and the best pension plan in the country,” longtime president Warren (Smokey) Thomas has told members. “”We have a long and successful track record of real wins with the provincial government.“

Bankrolling and logistically supporting the breakaway drive is the Quebec-based Confederation of National Trade Unions, the province's second-largest labour group with about 300,000 members. The umbrella organization counts the union representing federal prison workers, who once belonged to the Public Service Alliance of Canada, among its affiliates.

OPSEU's leadership has fired back, warning of chaos and paralysis if the “scam” drive succeeds. The union has issued several warnings about of the perils of signing onto the association.

The confederation, one posting warns, is trying to get members to sign a card “by hook or by crook.” Another communique brands the raiding tour of Ontario jails as “dangerous” and “socially irresponsible” in light of the COVID-19 epidemic.

“Meetings by a union that's losing members and losing money in a doomed attempt to raid our union places unnecessary risks on our correctional members, their families and our communities,” Thomas warns in one post.

OPSEU also warns its corrections workers would put their pensions in jeopardy and pay higher dues because, it says, the confederation is losing members and bleeding revenue.

“They're getting desperate,” Thomas says.

Just how successful the raid has been to this point - it began in earnest in June and runs until the end of December - is difficult to verify independently. The association refuses to say how many OPSEU members have signed up but says they number in the thousands.

“People are very excited about being able to choose,” said Agnes Ogle, a rehabilitation officer at the Central North Correctional Centre in Penetanguishene, Ont. “A lot of people feel that they're being noticed for the first time in a very long time.”

Ogle, the association's vice-president, said her activism has sparked OPSEU's wrath, despite the union's contention that people have a right to choose their affiliation.

“I've been put in bad standing with OPSEU,” Ogle said. “That's not something that worries me.”

The association is hoping to gather signed cards from at least 40 per cent of OPSEU's correctional members which would force an automatic certification vote under the auspices of the Ontario labour board early in the new year. However, even if a majority were then to vote in favour of secession, OPSEU warns the fight would be far from over.

A key hurdle, the union points out, is provincial law that establishes OPSEU as the bargaining agent. A court battle, it warns, would paralyze any collective bargaining.

“The Corrections Bargaining Unit will be left out in the cold,” OPSEU says. “Our contract will be frozen for years.”

The association, on the other hand, said it was confident constitutional free association rights would ultimately trump the legislation. It points to a similar battle involving RCMP officers, who won the right at the Supreme Court of Canada in 2015 to unionize despite a law to the contrary.