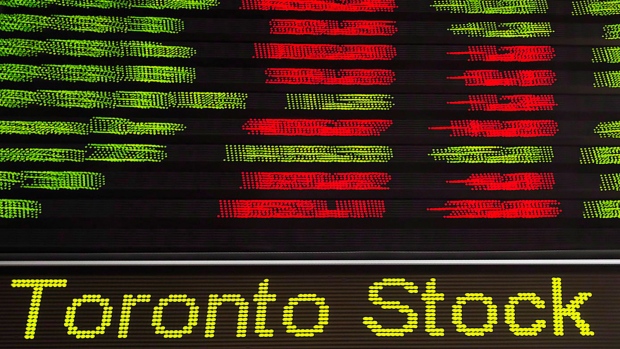 Financial numbers flow on the digital ticker tape at the TMX Group in Toronto's financial district on May 9, 2014. THE CANADIAN PRESS/Darren Calabrese

The TSX surged for the second day in a row as China announced that it would lift punitive tariffs imposed on U.S. soybeans, pork and some other farm goods, the latest olive branch extended between the two major economic powers.

Much talk about recession fears in recent weeks has now given way to renewed optimism about the U.S.-China trade relationship, and room still remains for stocks to go even higher, said Allan Small, senior investment adviser at HollisWealth.

“As long as the trade talks progress, we can go higher.... A lot of people thought we were in the ninth inning and the game is almost over,” he said. “I don't think so. I think we can grind higher for the foreseeable future, based on favourable trade conditions with China.”

The announcement by a Chinese state news agency that it “supports domestic companies in purchasing a certain amount of U.S. farm produce” comes after President Donald Trump decided Wednesday to postpone a tariff hike on Chinese imports from Oct. 1 to Oct. 15.

U.S. markets, however, were a mixed bag amid a slide in technology stocks.

In New York, the Dow Jones industrial average closed up 37.07 points at 27,219.52, helped by industrial stocks such as Boeing.

Shares of Apple Inc. slipped by 1.94 per cent to $218.75 on the Nasdaq as the iPhone maker and other large technology companies were asked Friday for documents as part of a Congressional antitrust investigation.

Broadcom Inc.'s shares were also under pressure after the chipmaker signalled it expected weak demand ahead.

While U.S.-China sentiment is improving, the unclear outlook has weighed on the semiconductor industry.

“Their outlook for the future still is uncertain, because they do a lot of business in China... And that took down a lot of the semiconductor (stocks),” Small said.

Meanwhile, the Canadian dollar traded for 75.43 cents US, down compared with an average of 75.73 cents US on Thursday.

The TSX's fresh high was led by financial sector, which rose 0.78 per cent as mortgage lender Home Capital Group Inc. rose 1.73 per cent amid talk on the campaign trail of an expansion to the first-time homebuyers program.

Still, there is room for the TSX to reach beyond the 17,000 mark for the first time, depending on how U.S.-China trade talks progress.

“The talk changes very quickly, and that just goes to show you how much the world, and investors, are paying attention to these trade negotiations.”