An overnight fire at a City of Toronto operations yard in Scarborough caused an estimated $5 to $10 million in damage, Toronto Fire Services says.

The two-alarm blaze broke out at an operations facility on Midland Avenue shortly before 2 a.m.

At the height of the blaze, 12 fire trucks and 45 firefighters were on scene.

Toronto Fire Capt. Michael Westwood said the fire was first reported by an employee who was at the facility at the time.

Westwood said the worker was fuelling a vehicle when they heard popping sounds, took a look inside the building and saw the fire.

Several vehicles were inside the building at the time and crews believe the fire may have started inside one of the vehicles.

A pickup truck and garbage truck in the building were completely destroyed, fire officials say.

In all, two garbage trucks, one street sweeping vehicle, one pickup truck and one service vehicle were damaged in the fire, the city said.

A spokesperson for the city said 16 fleet bays and an office area were also damaged.

There was no immediate impact on city services, the spokesperson said.

Westwood said the fire was under control at around 3 a.m. but crews are still battling hot spots on the roof.

No one was inside the building at the time of the fire and no injuries were reported. 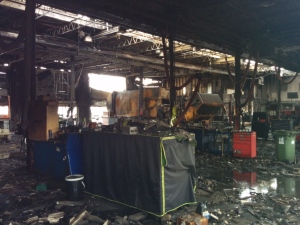 Photos of the extensive damage 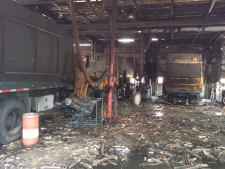