An industrial fire that broke out in a quarry in Mississauga Sunday afternoon sent thick plumes of grey and black smoke billowing into the air.

Police and firefighters were called to the quarry near some rail tracks at Dundas Street East and Cawthra Road in Mississauga at around 5 p.m.

They arrived to find tires and railway ties on fire, police said.

No one was injured.

The fire appears to be contained to the quarry, police said.

Still, the smoke was visible for miles around, including from Toronto’s waterfront. 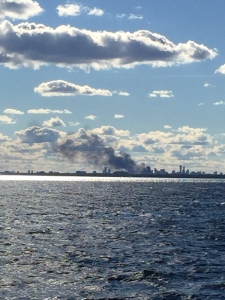