Firefighters continue to battle a massive blaze that broke out in a townhouse complex in Richmond Hill Sunday afternoon.

Deputy Fire Chief Bryan Burbidge told reporters at the scene that when fire crews arrived, they encountered heavy flames and lots of smoke. 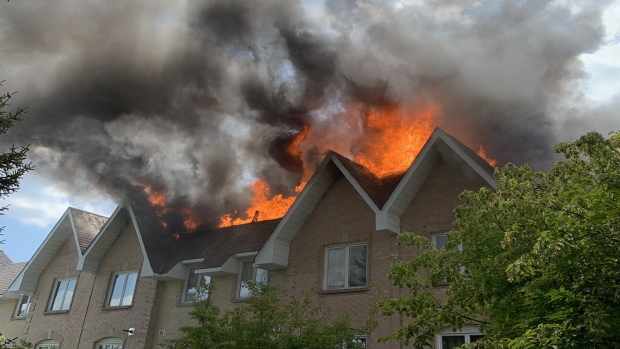 Images sent to CP24 by a person who lives across from the complex appear to show the fire spreading from one home to adjoining houses.

"At that time, the fire is progressed itself into multiple units. So, majority of the effort at that point was contained from the inside of the structure to try to put the fire out, but it got out of hand from the above portions and crews had to retreat and fight the fire defensively," Burbidge said.

Fire crews from Central York and Vaughan were also called to the help battle the blaze.

Thank you to our partners @CentralYorkFire @VaughanFire @MarkhamFire for providing assistance both at the scene and coverage within #RichmondHill while are crews are committed at the scene of this fire. https://t.co/6EH2qnf1xm

Burbidge said the fire affected a total of 16 units.

He noted approximately 55 firefighters are currently on the scene trying to put the fire under control.

"There are many areas, many voids inside the roof structure that is still involved in the fire," Burbidge said.

The extreme heat also did not help fire crews. York Region is under a heat warning.

Burbidge said they've been rotating firefighters to try to get them rehydrated. York paramedics are also at the scene monitoring their vitals.

"Thank God there have been no injuries at this point, and we want to make sure that that stays the same," he said.

The cause and origin of the fire are still unknown. 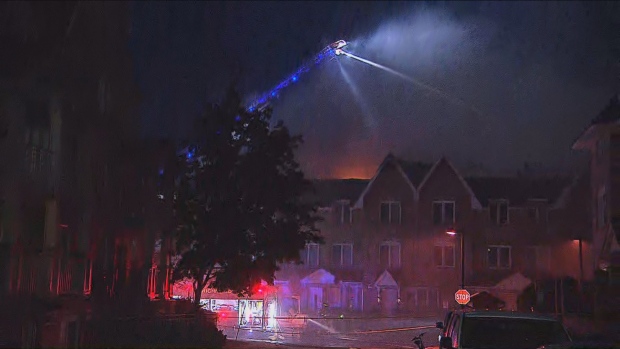 As for those who've been displaced by the fire, Burbidge said they have engaged with York region's emergency social services and Red Cross to help the residents with food, lodging and other personal items.

"We're currently trying to track down all the residents of those units, finding out what their needs are going to be. They won't be able to go back into the building itself for quite a number of days."

'It's heartbreaking:' Residents react to fire

Holding back tears, Anna Perchine, who lives in one of the affected units, watches from a distance as firefighters douse water on her house, hoping that her two cats who were inside are still alive.

"It's been going on for over two hours now, I believe. And it looks like it keeps getting worse," Perchine said.

"I'm just really worried about my pets in there right now. I don't really care about the stuff right now."

She said they were not home when the fire broke out.

"It's just a really big stress on us right now. Even though what's going on with the world right now, this is not something we need," Perchine said.

"They said they can't do anything, and you have to wait for this whole thing to just be over." 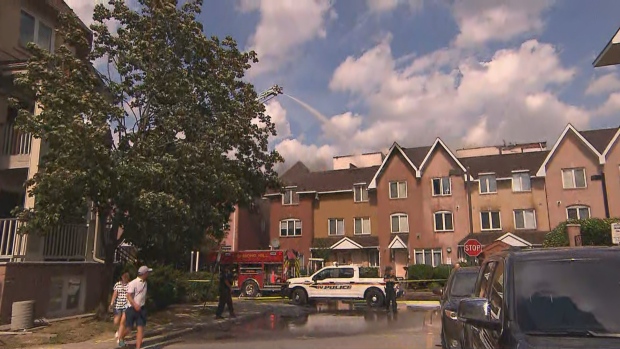 When asked if crews have rescued any pets, Burbidge said he does not have any information at this time.

Ajay Matthew, who was home with his family at the time, said her wife felt the heat, but he thought it was the hot weather or someone was cooking.

A short time later, Matthew said he saw huge flames on the roof of their home, and a neighbour knocked on their door to alert them about the fire.

"I didn't take anything out. I just came out with my family," Matthew said. 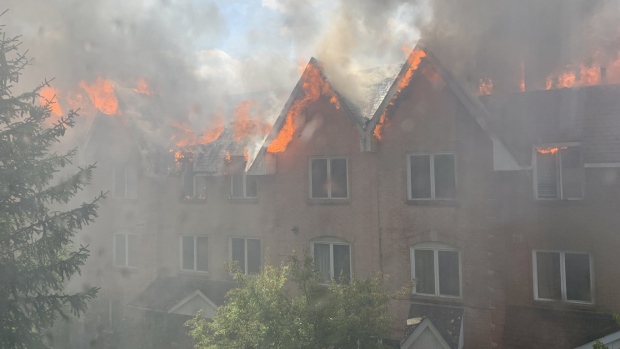 Rhiannon Tatham, who lives a block away, said when she saw the flames, she started alerting all her neighbours.

"I was banging on all the doors on both sides to get the people out, and I ran in, and I got two babies and two dogs out," Tatham said.

"As far as we know, there's nobody that's been hurt."

Tatham said it is devastating to see the damage the fire has caused to her neighbours.

"It pains as much to see your neighbours and people that you know going through this. It's heartbreaking."

Siraj Ahmadi, who also lives in the neighbourhood, said residents will be coming together to help those affected.

"We're just one community," Ahmadi said. "If one thing happens to one block, then you know the entire community is coming together and helping each other out."