A massive fire has destroyed an industrial building at a small airport in Stoney Creek as well as more than 15 vehicles that were located inside it.

The fire broke out at the large building on the grounds of Stoney Creek Airport at around 1:40 p.m.

Deputy Hamilton Fire Chief Dan Milovanovic says that two employees were working inside the building when they noticed a fire of some sort involving a furnace.

He said that the employees tried to put out the blaze themselves but were unable to contain it and “quickly” exited the premises.

A 911 call was then made from a neighbouring business, though Milovanovic said that by the time firefighters arrived on scene the structure was “fully involved.” 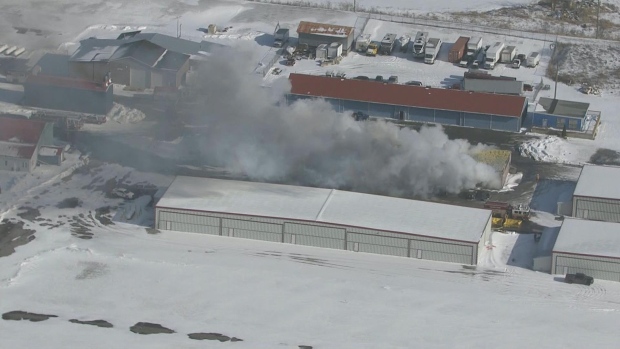 Milovanovic said that the structure was used as a maintenance shop of some sort, though the exact nature of the business is not immediately clear.

He said that there were reports of explosions during the fire, likely as a result of propane tanks located inside.

“The (Office of the Ontario) Fire Marshal was notified as a result of the report of explosions, so they will be attending,” he said.

At least 10 fire trucks were on scene at one point and drivers were being urged to avoid the area.

Roads in the vicinity of the airport eventually reopened at around 2:50 p.m, though.

An estimate has not been provided for the total dollar loss as a result of the fire.

"Until we get a complete smoke free environment and we can get in and get a better look at what is in there we won't be able to put a dollar value on it," Milovanovic said.

Hamilton Police are investigating an explosion at the Stoney Creek Airport in #HamOnt. Please stay out of the area as traffic will be affected. More information to follow.