Toronto firefighters spent hours trying to contain and extinguish a three-alarm fire that ripped through a commercial building in Yorkville on Wednesday.

Crews are still trying to put out spots that are still smouldering.

Investigators are trying to determine the cause of the stubborn fire that gutted the four-level building and has now displaced a basement restaurant, optical store, spa and hair salon.

The blaze was extremely difficult to extinguish because it spread into the walls and roof of the building at 84 Yorkville Ave., and crews had to contend with bitterly cold weather that froze a fire hydrant and coated firefighters' gear in ice.

No one was seriously injured but a woman named Falon, who lives in an apartment next door, described her narrow escape thanks to firefighters who told her she had a minute to flee.

Falon said firefighters hacked down her door with an axe before they carried her down the stairs and outside to safety.

“It’s crazy, it’s terrifying,” the woman, who was visibly upset, told CP24 at the scene. “I’m just thankful that they grabbed me and I’m OK.”

Two women were working at the spa when the fire alarm sounded at about 8:35 a.m. and both escaped with slight smoke inhalation. Both were treated at the scene by paramedics, Kostiuk said.

Police arrested a 54-year-old man who they say assaulted at least one firefighter and got into a scuffle with an officer at the scene.

Toronto Fire Services division commander Andrew Kostiuk said the man is a contractor who was working inside the building when firefighters rushed in with their axes, and he shoved at least one of them.

Kostiuk said the police officer was taken to hospital to be treated for a shoulder injury sustained during the scuffle.

When they arrived, firefighters encountered flames on the second floor but the fire spread to other floors and into the roof and walls. Crews used multiple aerial ladders to spray water on the flames from above.

At 10 a.m., a loud horn repeatedly sounded to call crews out of the burning building. That's when they went into an exterior attack due to the dangerous conditions inside.

At one point after that, flames were shooting through the roof and firefighters attacked the blaze as they stood on the roof next door.

Kostiuk said the fire was difficult to access because it was located in the middle of the long and narrow building, which is located between Bay Street and Avenue Road.

The cold posed another challenge for firefighters, who became covered in ice as water from their hoses froze. Crews worked in shifts and they warmed up in a TTC bus that provided shelter.

Alan Brown, who manages a neighbouring property, said the wood-frame building that caught fire is about 150 years old.

Flames shoot out of the roof of a building on Yorkville Avenue on Wednesday, Jan. 22, 2014.

Firefighters battle a blaze at a building on Yorkville Avenue on Wednesday, Jan. 22, 2014. 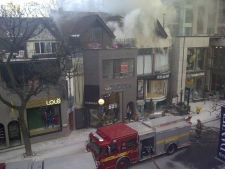