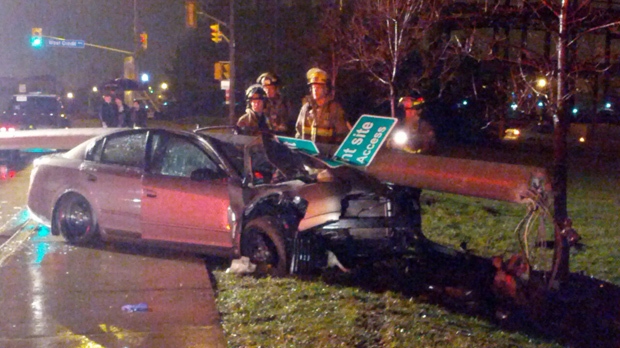 Firefighters were called in to free a man from a car after it crashed into a pole near Mississauga Road and Derry Road early Monday, Dec. 10, 2012. (Tom Stefanac/CP24)

Firefighters in Mississauga had to free a man from his car after it crashed into a pole early Monday morning.

The man became trapped in the car after it slammed into the pole, and the pole fell over and landed on top of the vehicle, crushing the top of it.

The single-vehicle crash occurred near Mississauga Road and Derry Road at about 3:30 a.m.

After being freed from the car, the man was taken to a local hospital, where he was reportedly being treated for non-life-threatening injuries.