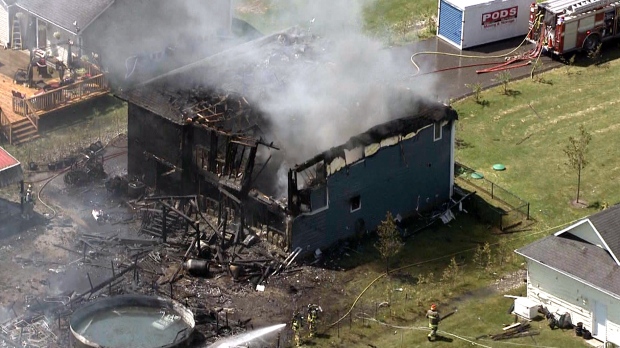 A home in the Township of Scugog has sustained serious damage after a possible house explosion on Tuesday. (CTV News Toronto)

Several firefighters were injured when a house in Scugog exploded on Tuesday morning, sending debris in all directions and damaging responding police vehicles.

Durham Regional Police say emergency crews were called to a home on Fralick’s Beach Road at 10:22 a.m. Tuesday for a report of a possible propane tank explosion.

Const. George Tudos said as many as three firefighters were injured fighting the blaze that followed the blast.

The main structure on the property was completely destroyed, with the roof blown off and only the walls on each sides remaining upright.

The OPP is also on scene and there are numerous road closures in the area.