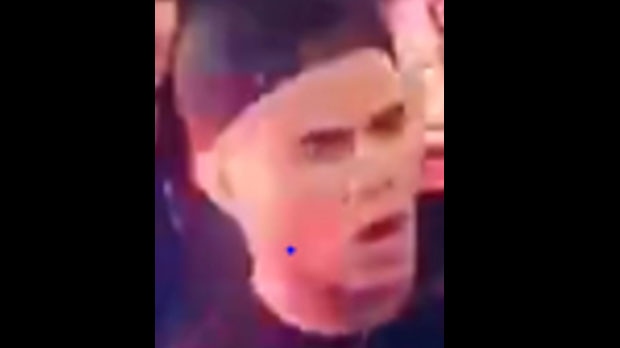 The first of seven suspects wanted in connection with a mischief investigation has been arrested by officers. (Toronto Police Service)

One of seven suspects accused of jumping onto a police cruiser while celebrating the Raptors’ Game 6 win over the Milwaukee Bucks on Saturday night has surrendered to officers.

The vehicle was stopped in the area of Yonge and Dundas streets at around 11:20 p.m. when several men began jumping on top of it.

Police said one of their officers attempted to arrest one of the men when the crowd began to encroach on him. At that point, officers said, one of the suspects allegedly threatened to kill the officer, which prompted him to seek safety inside the vehicle.

Thousands of fans flooded the streets of downtown Toronto after the historic win, which put the Raptors in the NBA Finals for the first time in franchise history. Crowds formed around the downtown core, including Yonge-Dundas Square.

Investigators previously said there were no arrests made that night, calling it an “impressive” result.

But, they may have spoken too soon.

Images of the seven suspects were released by investigators on Wednesday.

One day later, police said Yoel Martinez-Hernandez was the first arrest to be made in the case. The 19-year-old has been charged with one count of mischief after surrendering himself to officers on Wednesday afternoon.

He is scheduled to appear in court on July 10.

While investigators continue to search for the remaining six suspects wanted in this case, they have released an additional photo of the fifth suspect, who is wanted on one count of threatening death.

Ahead of Game 1 of the NBA Finals in Toronto against the Golden State Warriors on Thursday night, police are encouraging fans to celebrate in a respectable manner.

“At this time, I think the whole city is excited – it’s an exciting time, it’s exhilarating and we’re really thrilled the Raptors are in the finals and we want to stress that, we want to encourage people to celebrate but by all means we want you to do it responsibly and we want you do it safely,” Const. Allyson Douglas-Cooke told CP24 on Wednesday.

“We don’t want you to hurt anybody or destroy our city.”

Anyone with further information regarding this investigation is asked to contact police at 416-808-5200 or Crime Stoppers anonymously at 416-222-TIPS (8477).

[Editor's Note: An image of the fifth suspect has been removed from this story as he has since been identified as a youth.]