A Toronto personal support worker has become the first person in Ontario to receive an approved vaccination against the novel coronavirus.

At about noon Monday, Anita Quidangen sat down for her jab in a gymnasium at University Health Network’s Michener Institute campus.

As she received her shot, the room erupted in applause. 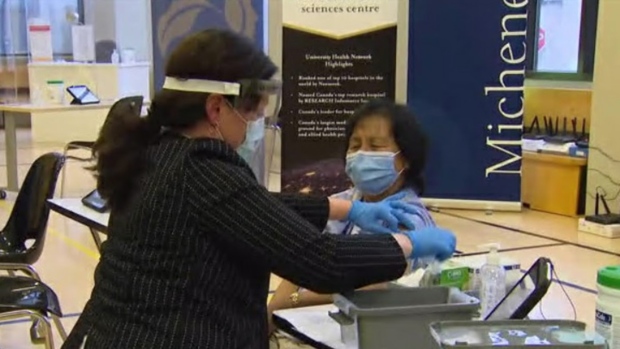 Quidangen has worked at The Rekai Centres on Sherbourne Street since 1988.

“She has worked tirelessly to care for some of our most vulnerable, both throughout this pandemic and since her first days as a PSW in 1988. Anita has spent years rolling up her sleeves to protect our province, and today, she didn't hesitate to find a new way to do so. She represents the best of the Ontario Spirit,” Ontario Premier Doug Ford said in a statement

Several of Quidangen’s colleagues at Rekai also received their shots on Monday.

Health Minister Christine Elliott said everything appeared to working smoothly in Toronto and Ottawa today, as Monday’s vaccinations were a pilot run for larger distribution around the province.

“It’s certainly a huge logistical challenge – pleased to have a smaller number of doses come in. We will be ready for larger shipments probably before the end of December.”

She cautioned that it will still be a while before the general public can receive vaccines.

“It’s going to take a number of months before everyone can be vaccinated that wants to receive the vaccine.”

Doses of a second vaccine manufactured by Moderna is expected to arrive in Canada over the next two months, but it has not yet been approved by Health Canada.

“You can’t rush that, that work needs to be done so we can certify to Ontarians that it is safe to receive that vaccine,” Elliott said.

The province initially said the first recipients of the vaccine would be inoculated on Tuesday but the province has now said people will begin receiving the shots on Monday.

A UPS cargo plane carrying the vaccine landed in Hamilton, with some of the first 6,000 doses of vaccine expected to arrive at a UHN hospital site in Toronto around 9 a.m. Monday morning.

Doses of the vaccine will also head to The Ottawa Hospital, but are likely coming from a plane that landed at Mirabel Airport in Montreal due to its proximity.

"We’re very excited, obviously the vaccine can’t come soon enough, this is giving us a great boost of morale."

He said that even after widespread inoculation begins, people will still have to mask in indoor settings and stay apart from one another.

"(The) vaccine is an insurance policy, it’s not a cure-all, so we’re going to have to be very disciplined."