OTTAWA -- The federal Liberal government is kicking off what it calls the first phase of its inquiry into the tragic phenomenon of missing and murdered indigenous women and girls.

Justice Minister Jody Wilson-Raybould says the government will consult the families of victims over the next two months to get their input into how the inquiry should be designed and what it needs to accomplish.

Wilson-Raybould was joined for the announcement by Indigenous Affairs Minister Carolyn Bennett and Status of Women Minister Patty Hajdu.

She says while no inquiry can undo what has happened, it will help find a way forward because Canada "can and must do better."

Bennett says the consultations, which will include a website to allow Canadians to provide input and learn more about the process, will help to determine the terms of reference for the inquiry.

"The victims deserve justice; their families, an opportunity to heal and to be heard," Trudeau said in a speech earlier today.

Trudeau also announced that his Liberal government plans to lift a long-standing cap on First Nations funding, even as the economic and political pressure on the federal pocketbook continues to mount.

"As you know, that limit has been in place for nearly 20 years," said Trudeau, who promised to remove the cap in the government's first budget.

"It hasn't kept up with the demographic realities of your communities, nor the actual costs of program delivery."

Trudeau's speech, delivered to a special assembly of chiefs from the Assembly of First Nations in Gatineau, Que., is part of a broader promise to reset the fractured relationship between Ottawa and Canada's Aboriginal Peoples.

"Constitutionally guaranteed rights of First Nations in Canada are not an inconvenience but rather a sacred obligation," Trudeau said.

"I promise you that I will be your partner in the years to come, and hope that you will be mine."

"In his mandate letter to each and every cabinet minister, Prime Minister Trudeau wrote it is time for a renewed nation-to-nation relationship with indigenous peoples," Bellegarde said. 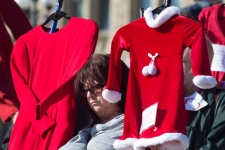 A woman holds up a red dress during a vigil for missing and murdered aboriginal women on Parliament Hill on Tuesday, Nov. 3, 2015 in Ottawa. (The Canadian Press/Adrian Wyld)