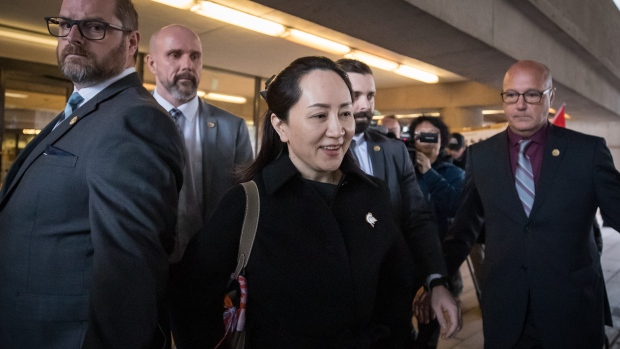 Huawei chief financial officer Meng Wanzhou, who is out on bail and remains under partial house arrest after she was detained last year at the behest of American authorities, leaves B.C. Supreme Court, in Vancouver, on Tuesday January 21, 2020. THE CANADIAN PRESS/Darryl Dyck

VANCOUVER -- A lawyer for Huawei executive Meng Wanzhou says the Crown has changed its arguments, telling a judge who issued an arrest warrant one thing and another to the justice who will rule on the extradition.

A British Columbia Supreme Court hearing wrapped today, focusing on the legal test of double criminality, or whether the conduct Meng is accused of would also be a crime in Canada.

The United States has charged her with fraud over allegations she lied to HSBC about Huawei's relationship with an Iran-based subsidiary, putting the bank at risk of violating American sanctions.

The defence says the alleged lie would not have put HSBC at financial risk in Canada because the country has no sanctions against Iran, but the Crown argued the bank faced reputational risk that could have led to economic harm.

Meng's lawyer Scott Fenton says the Crown's arguments before a judge issuing an arrest warrant in 2018 and in court documents all focus on the risk of violating American sanctions, even when discussing reputational risk.

He says the Crown is now speculating that HSBC could have lost business relationships if it was revealed to be doing business with Iran, regardless of sanctions, and this marks a change in its arguments.

“Milady, in my submission this is wrong. The court is being embarrassed,” Fenton told Justice Heather Holmes.

Meng's arrest in December 2018 at Vancouver's airport set off a diplomatic uproar with Beijing detaining two Canadians and restricting some imports in moves widely viewed as retaliation.

She denies the allegations and is free on bail, living in one of her two multimillion-dollar homes in Vancouver.

Holmes reserved her decision after the defence concluded its reply Thursday.

If the judge rules the legal test has been met, then the hearing will proceed to a second phase in June, but if she finds there is no double criminality, Meng will be free to leave Canada.

Her lawyers argued earlier this week that fraud must involve harm or risk of harm, but HSBC wouldn't have faced any consequences in Canada for doing business in Iran because of the lack of sanctions.

Crown counsel Robert Frater said Wednesday that the judge does not necessarily need to consider American sanctions law for the allegations to amount to fraud in Canada.

HSBC faced significant reputational risk for processing Iran-related transactions because it had already been penalized for doing business in countries including Libya and Sudan, the Crown said.

The Crown also argued that the judge can, according to case law, consider the context of American sanctions in a limited way to understand the risk faced by HSBC.