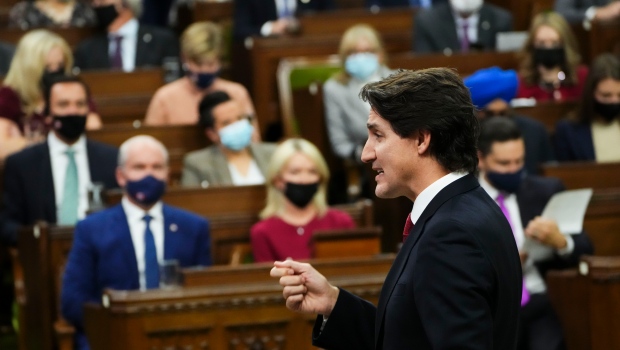 Prime Minister Justin Trudeau rises during question period in the House of Commons on Parliament Hill in Ottawa on Wednesday, Nov. 24, 2021. THE CANADIAN PRESS/Sean Kilpatrick

OTTAWA - Members of Parliament wasted no time Wednesday plunging back into fractious partisanship.

In the first question period since the Sept. 20 election returned practically the same minority House of Commons, Conservatives got personal while blaming Prime Minister Justin Trudeau for skyrocketing inflation.

They accused him of being out of touch with the concerns of average Canadians, repeatedly questioning whether he knows the price of gas, a loaf of bread, bacon, lumber or other basic household goods.

At one point, Calgary Conservative MP Michelle Rempel Garner alluded to Trudeau as a chicken.

“The price of everything has increased under this prime minister's watch,” she charged.

“So, Mr. Speaker, it begs the question: how much are Canadians paying for chicken these days?”

Trudeau, in turn, retorted that accusing a fellow parliamentarian of cowardice “is hardly the kind of tone that Canadians want to see.”

He argued that Canadians elected the “newly reconstituted House” to get back to work ending the COVID-19 pandemic, combating climate change and creating jobs.

The Liberal government will “continue to stay focused on Canadians even as Conservatives continue to try and fling mud. Canadians need a House that's going to work together,” he added.

But Trudeau managed to work in his own partisan barb at Conservative Leader Erin O'Toole's ongoing struggles with internal caucus divisions over mandatory vaccinations. In a pointed aside, he noted that ending the pandemic “happens with vaccinations, guys.”

Speaker Anthony Rota had to intervene to calm the ensuing uproar - applause and cheering from Liberals, jeering from Conservatives.

“The sound level is going up (so) that I can barely hear the prime minister,” he told the chamber.

It wasn't the only time Rota had to intervene Wednesday in a question period where the dynamic between Liberals and Conservatives was little changed from the hyperpartisanship that prevailed before the election or during the campaign.

Exchanges between Trudeau and Bloc Quebecois and NDP MPs, who are more likely to help the Liberal minority government pass legislation and survive confidence votes, were more civil. Indeed, at one point Trudeau thanked NDP Leader Jagmeet Singh for “continuing to stand up for Canadians.”

Singh had demanded that the government end the clawback of guaranteed income supplement and child benefits from seniors and parents who have collected emergency aid benefits during the pandemic. Trudeau said ministers are “actively working” on a solution to that now.

O'Toole led off question period with a nod to the extreme flooding and mudslides afflicting British Columbians, asking Trudeau for an update on federal efforts to help. But he pivoted quickly to what he called “the inflation crisis” and a more partisan tone.

“So is the prime minister having trouble understanding the concerns of Canadian families or does he just not care?” O'Toole asked.

Other Conservatives got more personal, painting Trudeau as a wealthy elitist who doesn't have to worry about the price of groceries.

“It's very disappointing to have a prime minister who is so out of touch the only thing that he might be worried about is if the cost of surfboards go up,” deputy leader Candice Bergen taunted.

In a play on words, Conservative finance critic Pierre Poilievre referred to “Justin-flation,” blaming the Liberals' unprecedented spending during the pandemic and the subsequent “inflationist Liberal deficits” for the rising cost of living. Inflation is worse in Canada than anywhere else in the world except the “money-printing mammoth south of the border,” he charged.

“I am impressed to see the high esteem in which (Poilievre) seems to hold me, that I was able to create a global inflation crisis with our initiatives to support Canadians through this pandemic,” Trudeau replied sarcastically.

Trudeau said his government is working to bring down housing prices and negotiating agreements with provinces and territories to bring in $10-a-day child care - a national program he noted some conservative provincial governments “even in places like Alberta” have signed onto but that federal Conservatives oppose.

Rempel Garner subsequently accused him of speaking in a “derogatory way” about her province “that is frankly unbecoming of the prime minister of this country. For shame.”