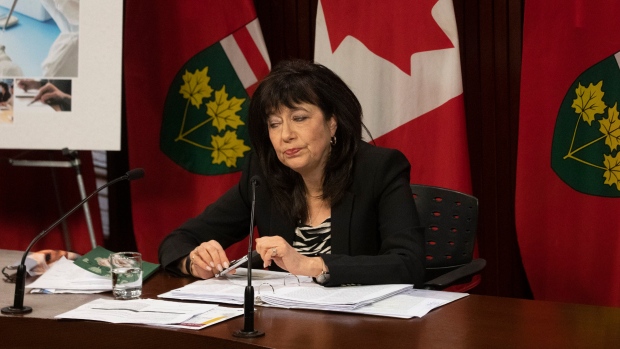 TORONTO - Ontario's auditor general released a report on Wednesday that sharply criticized the province's COVID-19 response. Among other things, auditor general Bonnie Lysyk said that Ontario's measures were “slower and more reactive relative to most other provinces.”

Here are five highlights from the auditor general's report.

The auditor general's report said that Ontario's command structure had become “overly cumbersome” and was not led by public health experts. The report said that the province's Health Command Table ballooned from 21 members to 90 participants, and now 500 people are involved. The meetings themselves were confusing, with the auditor general finding that all communication was by teleconference until July 14 - four months into the pandemic - when a switch was made to video conference.

Lysyk's report also said that Premier Doug Ford's government had to hire an external consultant to create a new government structure to address the public health crisis. Although the province declared an emergency on March 17, the auditor general said it took weeks for the consultant's approach to be implemented, with the first meeting of the Central Co-ordination Table held on April 11. The report said the consultants were needed because of significant changeover in leadership in Ontario's Provincial Emergency Management Office, outdated emergency plans and a lack of sufficient staff.

A failure to learn from the past

Lysyk said key lessons from the SARS outbreak of 2003 were not implemented by the time COVID-19 hit Ontario. For example, the final report from the SARS Commission said that taking decisive action early was the most important lesson from that outbreak. The auditor general's report said that instead it saw delays, conflicts, and confusion in the provincial government's decision-making in the early months of the COVID-19 pandemic.

Ontario's chief medical officer of health could have done more

The report found that Dr. David Williams, the province's top public health doctor, did not fully exercise his powers under the Health Protection and Promotion Act to respond to COVID-19. The auditor general said Williams did not issue directives to local medical officers of health to ensure public health units responded consistently to the COVID-19 pandemic, and he didn't issue directives on their behalf. The auditor general noted that in May, 34 local medical officers of health jointly prepared and signed a document stating there needed to be more direction and regional consistency.

Regional approach is too independent and confusing

Ontario's auditor general found that public health in other provinces, like British Columbia, Alberta and Quebec were “simply more organized.” The report said that variations in management and operations among Ontario's public health units contributed to fragmentation and inconsistencies across the province. It also noted that public health reforms recommended 15 years ago by the SARS Commission had not been fully acted on and that Ontario's 34 public health units were still operating independently with best practices still not being shared as of the report's release.