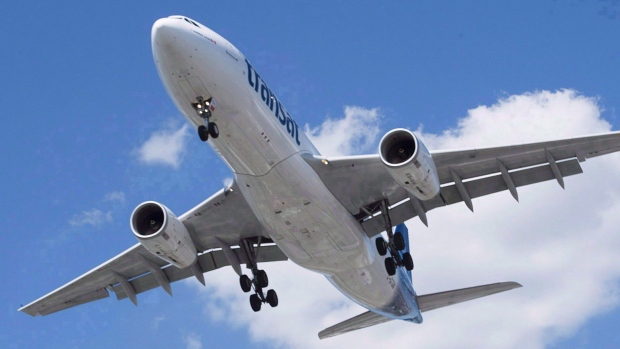 MONTREAL -- Canadian airlines are slashing their flight schedules as the COVID-19 pandemic continues to wreak havoc on air industry plans and profits.

Transat A.T. is nixing nearly 30 per cent of its flights for the next two months. The tour operator said the ongoing impact of the Omicron variant and the federal government's "restrictive measures" last month have triggered a wave of trip cancellations by passengers.

On Dec. 15, the Public Health Agency of Canada advised against non-essential travel abroad.

Transat's slimmed-down flight schedule is in place Thursday through Feb. 25, though the Montreal-based company says more changes may be necessary.

Air Canada said in a flight advisory Wednesday it is suspending flights to at least 14 Caribbean destinations "in light of the current pandemic context," effective Jan. 24 through April 30.

The Montreal-based company cancelled 11 per cent of all flights Thursday and 10 per cent Wednesday -- 87 trips in total, according to tracking service FlightAware.

Air Canada Rouge called off 14 per cent of its flights Wednesday. And regional carrier Jazz Aviation, which partners with Air Canada, cancelled 16 per cent and 14 per cent Wednesday and Thursday respectively, or 155 flights in all.

Air Canada said all travellers impacted by the Caribbean route suspensions will receive a full refund.

Transat, which did not specify which routes were affected, also said customers will be fully refunded and, where possible, offered rebooked reservations as an alternative.

The move comes a week after WestJet Airlines Ltd. cut 15 per cent of its scheduled flights through to the end of January, citing a high proportion of flight crews calling in sick due to Omicron.

The airline sector, which had begun to recover following a devastating first year of the pandemic, is struggling once again amid the latest COVID-19 surge, with U.S. and Chinese carriers scrapping thousands of flights so far this month.

"The Christmas rush is over and Air Canada has decided to follow suit with our friends at WestJet and take the knife even further," said John Gradek, a lecturer at McGill University and head of its aviation management program.

"The whole year is on sale and it's still not enough. Air Canada is still seeing very, very weak demand."

This report by The Canadian Press was first published Jan. 6, 2021.