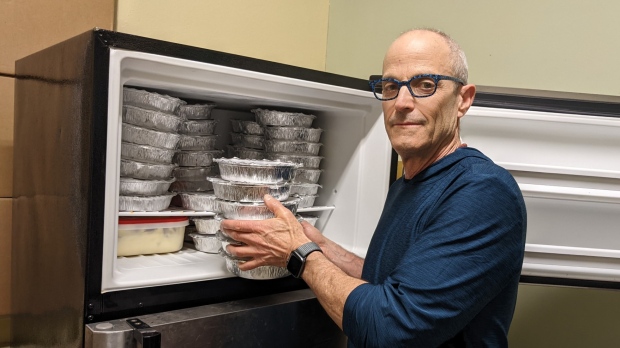 Rafi Aaron, the co-coordinator of St. Luke's Out of the Cold meal program, loads some prepared meals into a freezer at the downtown east church.

An Out of the Cold meal program run out of a church in downtown Toronto may have to temporarily suspend operations as it struggles to keep up with high demand.

The volunteer-run program at Saint Luke’s United Church near Sherbourne and Carlton streets has been offered on Wednesdays and Sundays since the onset of the COVID-19 pandemic.

It was originally intended to run for five months of the year and serve 7,000 meals. Instead, because of high demand it is currently serving at least 600 meals a week along with providing referrals to essential program and services.

Facing a nearly $30,000 year-end deficit, co-coordinators Rafi Aaron and Rev. Jim Keenan fear they may need to cut back the help they provide or even shut down for a few weeks, if they can’t find a way to make ends meet.

“We’re a lifeline for many people in the community, but it’s a tough go,” Keenan told CP24.com.

The program at Saint Luke’s operates entirely on donations and does not receive any government funding.

Keenan said the church wants to help people in the community who are struggling with food insecurity, but he said they’re not “professional poverty providers” and are finding it harder and harder to meet the need.

It’s a challenge being faced by many food banks and meal programs as inflation pushes the price of food higher and, in turn, creates more demand for community programs.

“We have to decide our next steps. Shutting down is obviously the last thing we would ever do, so we’re asking people for help for the final push to get through to the end of the year,” Keenan said.

Demand for food banks and meal programs has surged since 2019

The Allen Gardens Food Bank also operates out of Saint Luke’s, distributing food to people in need on Thursday and Friday afternoons.

The volunteer-run food bank has been around for 12 years and has managed to keep afloat with the support of the Daily Bread Food Bank and Second Harvest as well as various grants and other non-governmental funding sources.

But like the church’s meal program, the local food bank is also having a hard time keeping up with demand.

“The funding is always inadequate. What we really need is stable funding from the powers that be,” Co-Director Paul Uytenbogaart told CP24.com, noting a large part of the program’s budget is used to purchase supplemental food when the donated items they receive aren’t enough to meet the demand.

Since the pandemic the demand for food banks and meal programs has spiked.

Uytenbogaart said the Allen Gardens Food Bank used to serve 167 clients a day on average in 2019, but in October 444 people came through its doors each day it was open.

The Allen Gardens Food Bank serves people from all ages and backgrounds, including those who are experiencing homelessness and those who are underhoused.

But Uytenbogaart said they have recently seen an influx of refugees, many of whom fled political unrest in Latin and Central America, as well as scores of displaced persons from Ukraine.

Most clients are on some form of social assistance, he noted.

“The funds they are receiving are inadequate for the simplest of lifestyle,” Uytenbogaart said.

“Many (of our clients) don’t have enough money at the end of the month to buy food.”

High inflation, low social assistance rates, skyrocketing food and housing costs were all cited as key factors in the rise. 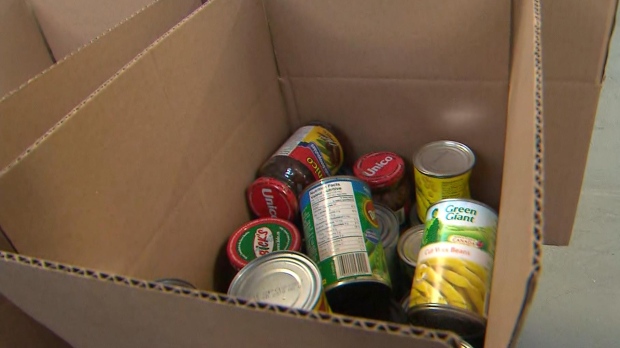 Long-time drop-in worker Diana Chan McNally helps some of the city’s most vulnerable unhoused people and those in precarious housing situations who come to nearby All-Saints Church-Community Centre for assistance.

Among other things, the organization serves hot meals to people in the community nine times a week.

She said many who live and stay in this part of the city, which McNally described as the “epicentre of homelessness in Canada,” may not have or even be able to use a kitchen to prepare meals.

While some visit a food banks, others, she said, rely on local programs that offer takeaway meals.

“Meal programs are actually the most accessible, but they’re the least thought about,” she said.

McNally said she’s seen the demand in the community for food and other supports grow “astronomically” since the start of the pandemic, and even more so recently with rising inflation, inadequate social assistance funding, and the city’s shelter system stretched to the brink.

“It’s really hard to keep up. … The situation is worse than ever before. What I’m seeing now is just beyond,” McNally said. “The whole system is just breaking.”

Aaron, of the Saint Luke’s meal program, said he’s never seen so many people outside.

“It’s a chasm. The shelter hotels are closing, there are program cutbacks, rising rent, high inflation, and not enough shelter beds. All of these things are happening at once,” he said.

“If we close, the reverberations will be felt throughout this community. It could be a matter of life or death for people.”

Aaron said the decision they’re faced with – who can or cannot eat – is “gut-wrenching.”

The hope, he said, is that they will find enough money to continue to operate the program uninterrupted through the end of 2022. But the fiscal challenges will likely re-emerge in 2023 should demand remain elevated, he warned.

“We’re always in a desperate situation,” he shared.

The City of Toronto previously funded a number of Out of the Cold programs, which were delivered by various faith-based groups across the city.

That funding, however, was discontinued following the 2020/2021 winter season and was redirected to providing permanent shelter spaces.

“The city is currently providing safe shelter and wrap around supports, including meals, to approximately 8,200 individuals each night. This represents an increase of 1,600 more people a night than this time last year,” a statement provided to CP24.com notes.