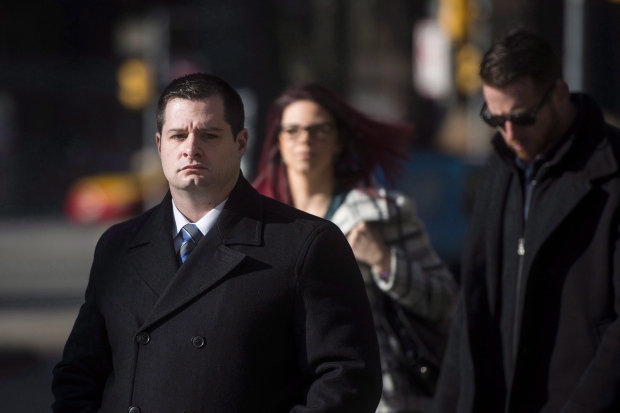 Const. James Forcillo, charged in the shooting death of Sammy Yatim, walks into court in Toronto, Wednesday, Nov, 25, 2015. A Toronto police officer on trial for killing a teen on an empty streetcar will be cross-examined by Crown prosecutors today. THE CANADIAN PRESS/Marta Iwanek

TORONTO -- A veteran Toronto police officer who was seen reholstering her gun moments before her partner killed a teen during a confrontation two years ago believed the youth's actions would get him shot.

"I thought that based on Mr. Yatim's behaviour and actions that he was going to get himself shot," Fleckeisen said. "He was hostile, angry, belligerent, and he was very defiantly and prominently displaying a knife in his right hand."

Forcillo has pleaded not guilty to second-degree murder and attempted murder in Yatim's July 2013 death.

Crown prosecutors argue Forcillo's actions during the incident weren't necessary or reasonable. Forcillo's lawyer contends his client's actions were justified and carried out in self-defence.

The jury that will decide the case has heard that Yatim consumed the drug ecstasy before he boarded a streetcar where he pulled out a small knife.

Videos and audio played at the trial have shown that Forcillo arrives on the scene, screams repeatedly at Yatim to drop the knife and fires nine bullets at the teen after a 50-second confrontation.

Under questioning from Forcillo's defence lawyer, Fleckeisen, who's been with the Toronto police for 24 years, said videos capturing the incident can't show the intensity of the situation.

"There's no way you'll ever understand the heart-pumping, hand-shaking reality when you're involved face to face in a lethal force encounter," she said.

"That night was and remains the most terrifying moment of my life."

Fleckeisen recalled that when she and Forcillo arrived at the streetcar, her partner had the most direct path to the vehicle and arrived at its doors first, pointing his gun at Yatim and yelling at him to "drop the knife."

She had her gun out as well -- "at the low ready" -- but soon holstered her weapon, court heard.

"I reholster my firearm for the purpose of calling a Taser on scene because that is our only other recourse," she said, denying a suggestion that she put her weapon away because she didn't find the situation dangerous.

"It's very easy to misinterpret and oversimplify my actions that night."

Forcillo has said his concerns about an imminent attack from Yatim appeared founded when he saw the teen jerk his knife towards him. The officer issued a warning to Yatim not to take another step towards police and fired when the teen moved forward.

Fleckeisen testified, however, that she did not see Yatim flick his knife, or issue any verbal threats, nor did she hear Forcillo's warning.

Her interpretation of the moment before shots were fired was that Yatim made a "very deliberate, intentional motion forward."

"Mr. Yatim looked like he was coming off the streetcar," she said, adding that Forcillo's shots were consequently not unexpected.

She was pressed on that point under cross examination.

"If he's coming off the streetcar it's obviously to go after an officer," said Fleckeisen, denying that she was shocked when Forcillo fired. "(Yatim) can't be allowed to come off the streetcar because he refuses to drop the knife."

Following Forcillo's first three shots, Fleckeisen said, she saw the teen's outstretched legs jerking as he lay on the floor of the streetcar.

"It's almost like someone who's using their lower body weight to sit up," she recalled.

Forcillo fired six more shots at Yatim before a sergeant with a Taser arrived and deployed the conductive weapon at the teen.

Fleckeisen said other tactical options -- such as using pepper spray on Yatim, throwing a baton at him, lobbing a baseball or paint can at him, blocking the streetcar doors with a bicycle, or closing them using an outside switch -- were not appropriate for the situation.

The options have been suggested by a Crown use-of-force expert who has testified that Forcillo had alternatives to using lethal force but didn't use them.

"They fly in the face of all common sense and logic," Fleckeisen said of the options. "The reason no officer entertained any of those suggestions is because they are as credible as a bag of tricks."

Fleckeisen added that Yatim's actions were what drove every police action during the confrontation.

"It's not until Mr. Yatim is actually doing something that actively is endangering us that the shots were fired," she said.