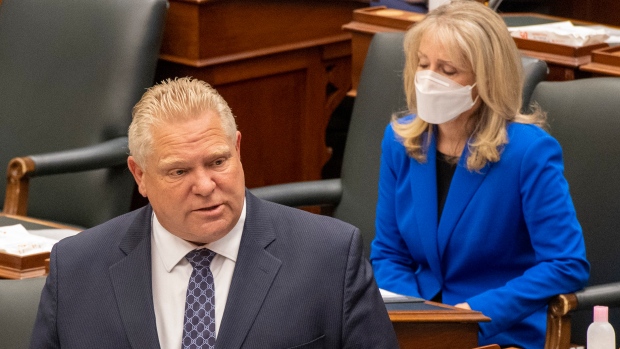 Ontario Long Term Care Minister Merrilee Fullerton listens as Premier Doug Ford answers questions calling for her dismissal at Queen's Park in Toronto on Wednesday, May 5, 2021. The premier has just finished a quarantine due to a COVID-19 exposure. THE CANADIAN PRESS/Frank Gunn

TORONTO - Premier Doug Ford defended his minister of long-term care on Wednesday, amid calls for her resignation after a scathing report found Ontario's nursing homes were neglected and unprepared for a pandemic.

Ford told the legislature that he takes ultimate responsibility for the tragedies in long-term care and promised to fix the system.

“The buck stops with me; that's who it stops with. It stops with me and I'll take responsibility,” Ford said during a debate on his first day back at Queen's Park after isolating from a COVID-19 exposure.

He said he had “full confidence” in Long-Term Care Minister Merrilee Fullerton, saying she “showed leadership” during the pandemic, which has killed 3,761 long-term care residents as of Wednesday.

“It was an absolute tragedy that happened not just here in Ontario, (but) around the world,” Ford said. “It was a tragedy ... but we're going to fix it. We're going to make sure we fix it.”

His comments come nearly a week after the Ontario Long-Term Care COVID-19 Commission issued its report calling for an overhaul of the sector.

That report and the government's response to the pandemic that devastated nursing homes dominated question period with opposition politicians repeatedly calling for Fullerton to step down.

The report laid blame at the feet of the former Liberal government and Ford's Progressive Conservatives, who were slow to respond in the early weeks of the pandemic.

It said the government hadn't yet formalized its response structure when outbreaks first set in at long-term care homes, and it was making up emergency measures as it went along.

It also called for the government to consider how nursing homes are managed, focusing on quality care, and took issue with care homes that are owned by investors.

She stopped short of committing to a permanent wage increase for personal service workers and indicated room for “mission-driven,” for-profit care homes in the future of long-term care in Ontario.

“The commission report was very clear about that, that it was less about for profit versus profit versus municipal, and more about the mission, in terms of caring,” she said.

In her first media appearance since she briskly ended a Monday news conference on the report, Fullerton spoke about her desire to improve the system and to continue in politics on the long-term care file, despite the pressures of the last year.

“I think you have to persist through something longer than you think you can, until it gets better,” she told reporters. “This job has to be done by someone who cares and I care.”

But opposition politicians expressed doubts on whether Ford or Fullerton have committed to necessary moves that would improve the system.

They noted that the government hasn't committed to changes like permanent wage increases for personal support workers or promised to implement other recommendations in the report.

Mike Schreiner of the Green party and John Fraser of the Liberals both expressed concern that the government would not implement the report's recommendations.

NDP Opposition Leader Andrea Horwath, who called for Fullerton's resignation earlier this week, said it was disappointing to hear Ford defend the minister.

“He's (Ford) protecting his failed minister, he's putting out platitudes, but that's not what people deserve,” she said.

Horwath also criticized the premier for “deflecting” by pointing to international travel as a source of cases, and criticized the government for not committing to permanently raising wages for personal service workers.

“I think what it really does is show very clearly that this Ford government, and this minister of long-term care have no intention of fixing long-term care system,” she said.

This report by The Canadian Press was first published May 5, 2021.