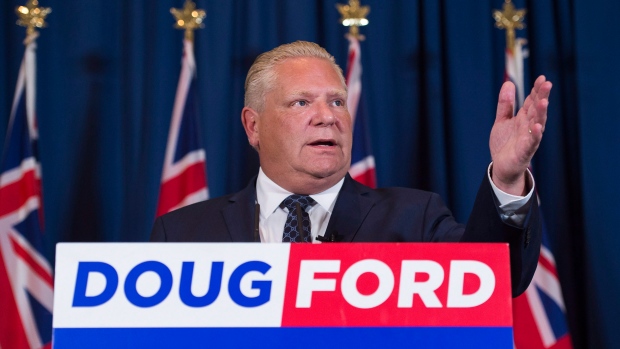 Ontario premier-elect Doug Ford speaks to the media after winning the Ontario Provincial election in Toronto, on Friday, June 8, 2018. THE CANADIAN PRESS/Nathan Denette

TORONTO - A spokesman for Doug Ford says Ontario's incoming premier is determined to deliver on his campaign promise to scrap the "disastrous" cap-and-trade system and fight a federal carbon tax.

Ford's pledge is causing concern in Quebec, a province that introduced a cap-and-trade system in 2013 and shares a carbon market with Ontario and California.

Ford, whose Progressive Conservatives won a majority of seats in the Ontario legislature, is currently meeting with his transition team to select his cabinet and prepare for his official swearing-in on June 29.

Quebec's environment minister, Isabelle Melancon, says she is watching closely to see who Ford will appoint as her counterpart and plans to stress the benefits of the cap-and-trade system.

She says Quebec Premier Philippe Couillard did not raise the issue when he met with Ford a few days ago, but the two are set to meet again in July during the Council of the Federation, an annual meeting of provincial and territorial leaders.

A spokesman for Ford says the Tory leader is also committed to fighting federal rules set to kick in next year that require provinces to have carbon pricing in place -- rules already being challenged by the governments of Saskatchewan and Manitoba.