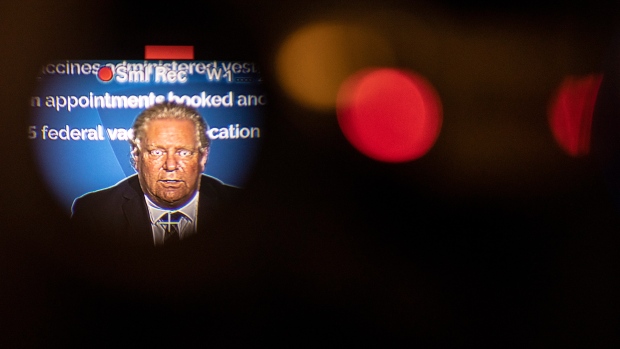 Ontario Premier Doug Ford is seen through the television camera's eye piece as he attends a news conference at the Queens Park Legislature in Toronto on Wednesday, April 7, 2021. The Province announced further lockdown restrictions in their latest effort to combat the spread of the COVID-19 virus. THE CANADIAN PRESS/Chris Young

Ontario Premier Doug Ford will speak about the third wave of coronavirus in the province on Monday afternoon, as case numbers have twice set all-time records in the past seven days and hospitals are increasingly strained.

On Sunday, the province reported more than 4,400 new cases, with ICU occupancy above 600.

To cope with the increased strain, GTA hospitals have largely shut down non-emergency surgery, evacuated dozens of patients to other areas of Ontario, and are surging capacity by enlisting non-ICU doctors and nurses to help in critical care settings they have not been trained for.

They’ve also obtained permission from the province to transfer patients to other hospitals with excess capacity, even if they cannot obtain that patient’s consent.

There are also at least four temporary field hospital units set up in the GTA, mainly for less severe patients requiring supplemental oxygen.

Meanwhile, Ontario’s public school system is still allowed to operate during April’s emergency stay-at-home order, but medical officers of health in Toronto, Peel, Wellington-Dufferin-Guelph have ordered all schools in their jurisdictions closed until at least April 18 due to rampant infections.

Ford will be joined by Health Minister Christine Elliott and Education Minister Stephen Lecce and Chief Medical Officer of Health Dr. David Williams for the announcement scheduled for 2:30 p.m.

CP24 will broadcast it live.