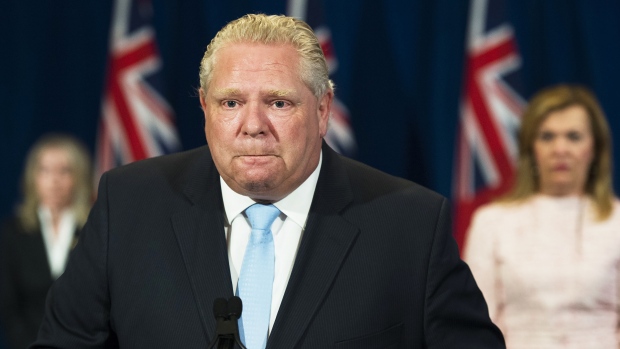 Premier Doug Ford is expected to unveil the province’s new COVID-19 testing strategy during his daily briefing at Queen’s Park this afternoon.

Officials have previously set a goal of turning around 16,000 individual tests each day but yesterday marked the first time that they actually hit that threshold in weeks.

In an effort to ramp up testing, the province has widened its criteria to include anyone with at least one symptom or a job that puts them at a higher level of risk.

Ford has also suggested that the province will begin testing large groups of asymptomatic individuals as part of its new testing strategy.

“I want to see truckers tested, I want so see taxi drivers tested, I want to make sure that long term care (gets regularly tested). We can’t just test everyone and walk away. I want to go into the automotive sector and start testing people right across the province. I want to see (workers at) food processing plants being tested,” he said last week. “As sure as I am standing here we are going to be ramping it up.”

Ontario has the capacity to turn around approximately 20,000 tests per day but saw the number dip as low as 5,813 over the last few weeks.

Ford will be joined by Health Minister Christine Elliott and Chief Medical Officer of Health Dr. David Williams for today’s briefing. It is scheduled for 1 p.m.