Doug Ford may be done with municipal politics, but the City of Toronto isn’t done with him.

According to a city spokesperson, Ford has had 478 of his mayoral campaign signs removed by city staff and that means he could be facing a fine of $11,950.

The sum includes a $25 charge for the cost of removing each sign deemed to be in violation of city rules over the course of the campaign.

Candidates are allowed to place signs on public property, but rules prohibit the placement of signs along the Don Valley Parkway or Gardiner Expressway and on civic buildings or parks. Any signs that pose a health and safety risk to pedestrians or motorists are also forbidden.

Although Ford is facing by far the biggest fine, Olivia Chow and new mayor-elect John Tory won’t get off scott-free.

Candidates have until 8 p.m. Thursday to remove all signs; otherwise they will face additional fines. 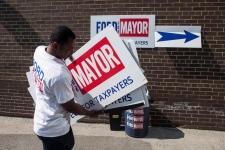 A volunteer carries sign boards outside the campaign offices before Toronto mayoral candidate Doug Ford starts his campaign by door knocking in his local Etobicoke neighbourhood of Toronto on Saturday, September 20, 2014. THE CANADIAN PRESS/Chris Young