After flatly insisting earlier this summer that Ontario would not pursue some sort of proof-of-vaccination system, the Ford government appears to be changing course.

The Ford government is expected to unveil an Ontario-based vaccine certificate system next week as COVID-19 cases rise and as public opinion shifts on the subject, a senior government source told CTV News Toronto Friday.

According to the source who has knowledge of the situation, the certificate “will be required in non-essential settings like restaurants and movie theatres.”

The source would not elaborate on the parameters required to request proof-of-vaccination and would not confirm what form the certificate would take.

However, the source said it “will likely be very similar to what we already have.”

Premier Doug Ford will meet with his cabinet next week to finalize the plan, according to the source.

There has been a growing chorus of calls from multiple stakeholders – from municipalities to businesses to healthcare workers and educators – to create some sort of vaccine passport that would allow people to signal that they have been vaccinated.

Such a system has already been implemented in a number of jurisdictions, including New York City and Quebec and the idea is popular in places with high vaccination rates.

Asked about the idea earlier this summer, Ford said Ontario would not do it because it would create a “split society.”

However, with strong support from the public as well as the private sector and with fears that the highly infectious Delta variant could drive a growing number of hospitalizations, the government appears to be rethinking the idea.

As of Friday, 75.6 per cent of Ontario residents 12 years of age and up have been fully vaccinated, while 82.6 per cent have received at least one vaccine dose. 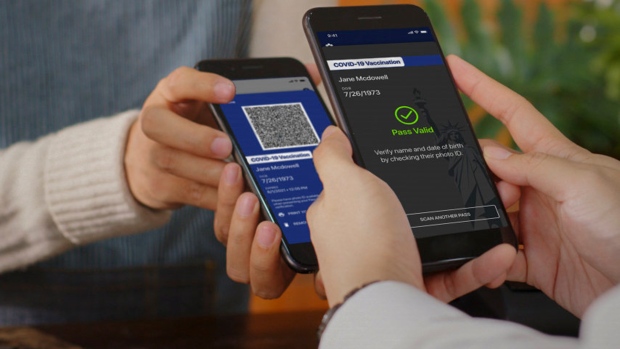 Word that Ontario will be introducing the system comes the same day that Liberal Leader Justin Trudeau urged Ford to “step up” and implement a provincewide vaccine passport. Trudeau pledged that if he is reelected, his government would lend financial assistance to the creation of provincial vaccine passports.

The federal government is developing a vaccine passport for the purposes of travel, but it is not expected to be ready before the fall and it is not clear whether that system could be used locally as well.

Medical officers of health in Ontario’s public health units said earlier this week that they would try to create regional vaccine passports if the province does not, but acknowledged that there would be challenges.

Because health and vaccinations fall under provincial jurisdiction, the province is the keeper of vaccination records for Ontario’s population. Any proof-of-vaccination system would therefore need, at the very least, their cooperation.

Dr. Charles Gardner, the chair of the Council of Medical Officers of Health, told CP24 Thursday night that he finds it “very difficult to imagine” each health unit creating its own system.

“I would say that, overall, we would want to see a vaccine verification process of some kind and that it would be best if in fact, there was a common approach,” Gardner said.  “And that’s really best done provincially. It’s very, very hard – essentially impossible – for it to be done individually, locally, by medical officers of health. We are certainly very interested in this taking place. We are considering whether some kind of local alternatives could be done but I have no doubt myself that it would be very, very awkward to achieve.”

PROVINCIAL SYSTEM WOULD BE MORE SECURE

While those who have been vaccinated have received receipts for their vaccination, critics have called for the creation of a system that would be secure and difficult to trick, as opposed to the paper slips which could easily be forged. 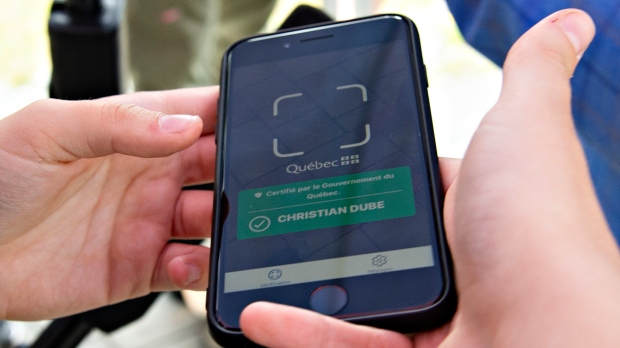 “I'd rather it (vaccination information) be visible through a centralized, standardized app than something that a local business kind of figured out on the fly and I don't really know where it's gonna go after that,” Levy said.

Levy said the Quebec vaccine passport, which provides each user with a unique QR code to upload into an app, has been well thought out and does a good job of maintaining privacy.

“I've done my own analysis and I've certainly looked at other experts’ analysis as well and this is highly secure,” Levy said. “The government has addressed all major security concerns that we would have. We know that the government isn't using this as a data grab and they're not using it to sort of reach into our phones. It doesn't look at our contact lists, it doesn't just share our location information, doesn't even access the GPS chip –  all of that sort of back-end technical stuff.

“It's very, very well-behaved and so yes we should always be concerned about governments getting involved in technology, but this is an app that ultimately is designed for the greater good. The risks are very low, but the benefits of using it significantly high.”

'WHO'S GOING TO POLICE THIS?'

The president and chief executive officer of the Canadian Federation for Independent Business told CP24 that he has some concerns about the introduction of vaccine certificates, especially for small businesses.

"We hope that they're going to provide the resources to the business community because this is going to be a bit of a logistical nightmare for so many small firms to have to adopt," Dan Kelly said.

"Who's going to police this? What's going to happen at the front of a restaurant or a cinema? Those concerns are very real for business owners."

Kelly added that some businesses are also worried about legal ramifications.

That's why he wants the Ontario government to address the concerns raised by businesses before rushing to implement the system.

While some businesses are still on the fence, Kelly said some are in favour of a vaccine passport as a way to keep them open amid the fourth wave.

"They do see it as a replacement to further lockdowns. We want to avoid that given Ontario's had the longest in the world," Kelly said.

"Whether it's going to play a role in keeping COVID at bay, as is anyone's guess, we do know the vaccine passports do lead to more people being vaccinated. And I suspect that that's the main goal of the plan."