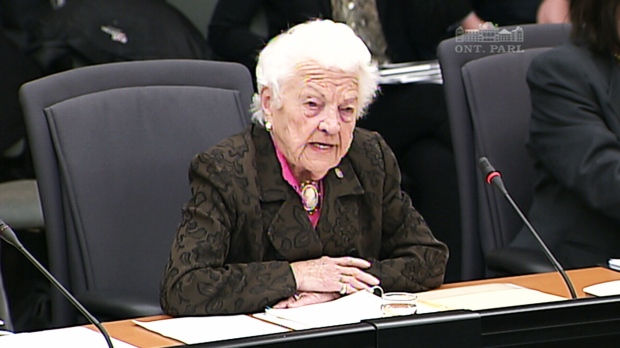 McCallion, who served as Mississauga’s mayor from 1978 to 2014, will join the PC government days after it announced a sweeping review of regional municipal governments in the province.

“Ms. McCallion brings many decades of public service, public advocacy and, most importantly, public representation that will enable her to provide advice to the Premier and the Minister of Municipal Affairs and Housing on a range of municipal issues,” the Ford government said in a statement Friday.

On Tuesday, the PCs said they would initiate a complete review of regional government and lower-tier municipalities, focusing on their ability to deliver services and maintain access for residents.

Michael Fenn, a former municipal chief administrative officer and provincial deputy minister, along with Ken Seiling, a former chair of Waterloo Region, were appointed as advisers to lead the review.

Results of the review are expected sometime in the summer of 2019.

"She is an excellent choice to be an advisor to the Premier and Minister of Municipal Affairs as there are few, if any, with more municipal government experience in Canada," Crombie said in a statement issued Friday. "I know Hazel understands Mississauga’s issues and positions and will be a strong advocate for our City and the municipal sector."

McCallion, a longtime Liberal, endorsed Ford and the PCs in the 2018 election, saying Ford was “hardworking” and “committed to fixing Ontario’s finances.”