Ford government's proposed Highway 413 will not be tolled, minister says

Ontario Premier Doug Ford and his ministers continued to tout a new highway that would run east from Halton to York Region on Wednesday, confirming that the route will not be tolled but still refusing to provide any detailed cost or schedule for completion.

Highway 413 would connect the junction of Highway 401 and Highway 407 to the terminus of Highway 410, and continue on eastward to Highway 400 south of King Road, spanning four to six lanes and 59 kilometres. 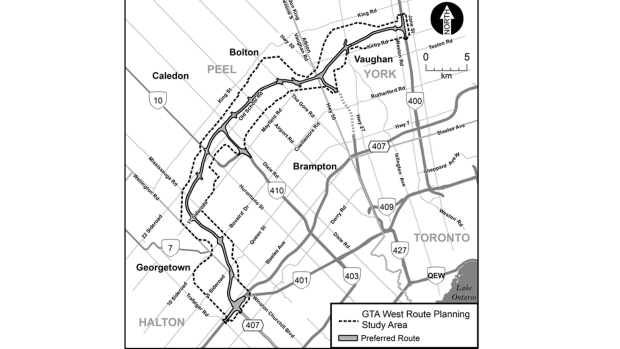 Ford said Wednesday decisions by the previous Liberal government not to build the highway amounted to ideology trumping the needs of what he estimated to be 300,000 current commuters who would benefit from the freeway.

“Sitting there and telling people to get on their bicycle, or get behind a horse and buggy to start driving, that just doesn’t cut it,” he said.

The government said it earmarked an unspecified amount of money to begin designing and tendering the project in its Fall Economic Statement last week, but politicians and bureaucrats alike repeatedly refused to speak about how much the roadway would cost.

All that they would say Wednesday is that funds to design and begin procurement will come from the $2.6 billion set aside to maintain all provincial highways and bridges each year.

Mulroney said “it is our intention to not place tolls on Highway 413.”

Liberal Leader Steven Del Duca has said his party still opposes the project, which he cancelled as the province’s transportation minister, saying it might cost $10 billion and take up to a decade to complete.

“Highway 413 won't give Ontario families the relief they need,” Del Duca said. “But it will pave over the Greenbelt and destroy farmland, while helping Ford's rich friends get richer.”

“It's the wrong project for the wrong reasons being pushed by the wrong Premier.”

Ford and Mulroney defended the proposed highway, saying the area it passes between cannot handle continued population growth without it.

“Ask anyone who drives on (GTA highways) and you’ll hear the same thing- they’re not suitable to handle current traffic and won’t handle the newcomers expected to arrive in the coming years,” Ford said.

Mulroney said the highway would “will make the difference between calling home to say you’re stuck in traffic, and sitting home to have dinner with your family.”

Green Party Leader Mike Schreiner has called on Ford to cancel the project and divert its funds to building more transit.

The project is also subject to a federal environmental assessment, and has not reached the design stage.

For its part, the NDP asked the Auditor General on Wednesday to review the Highway 413 and Bradford Bypass projects to "determine the full estimated costs" of both.