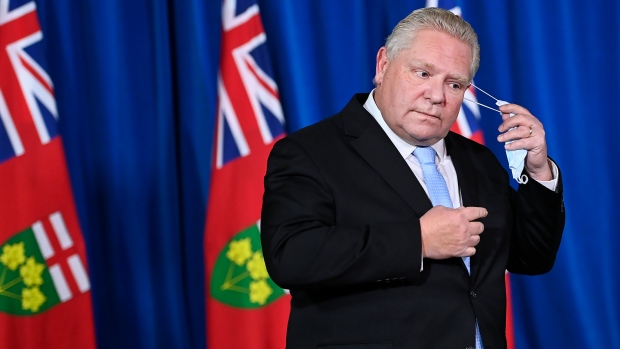 TORONTO - Ontario Premier Doug Ford suggested Thursday that his government would grant a request from Toronto and Peel Region to remain under a stay-at-home order for two more weeks.

The two COVID-19 hot spots are set to have their strict pandemic restrictions loosened on Monday but top local health officials have asked for a delay, saying easing measures next week could lead to more illness and death.

A decision on those two regions, as well as York Region and North Bay, which also remain under a stay-home order, is expected Friday.

“No one understands their area, in Peel and Toronto, more than their local medical officers of health,” he said. “I'm sure we're gonna follow the advice of the doctors.”

The top doctors for Toronto and Peel penned a joint letter to the province's chief medical officer this week asking for current restrictions - which include the closure of non-essential retail - to be kept in place until at least March 9.

Ford said the province was also concerned about variants.

“We have to keep our guard up constantly,” he said.

Meanwhile, Dr. David Williams, the province's chief medical officer, said he needed to review more data before making a recommendation on Toronto and Peel to the government.

“It's not just a rigid number that flips the switch,” he said. “It's a combination of qualitative and quantitative information that feeds into it. That gives us the best advice when we give that up to the ministers and cabinet.”

Williams added that while the province's cases continue to trend downward, Ontario remains in a “precarious” place because of the variant strains.

Ford's government began gradually lifting the stay-at-home order for parts of the province last week, with restrictions being loosened for the majority of Ontario this week. All those regions were transitioned back to the province's colour-coded restrictions system.

The economic reopening has been taking place despite expert warnings that it might set off a third wave.

In Toronto, the city's top doctor echoed some of those concerns on Wednesday, saying she has “never been as concerned about the threat of COVID-19 to (residents') health as I am now.”

York Region's medical officer of health, however, has said his community is ready to see an easing of the strictest measures.

Dr. Karim Kurji said Thursday that he has recommended York be placed in the red - or second-strictest - category of the province's tiered restrictions system. Under that category, people can access fitness facilities and dine indoors at restaurants, with limits on capacity.

“I'm not expecting to not get our wishes, but ultimately it is the province's decision,” he said in an interview Thursday.

Kurji said his public health unit is concerned about the mental health and economic impacts of the lockdown. He added that public health authorities are still asking people to say home except for essential trips.

The new variants of COVID-19 - of which York Region has detected 258 cases - are concerning, but an aggressive vaccine strategy, provincial and local restrictions and aggressive enforcement will help keep cases low, he said.

Kurji also noted at least one case where a variant of the virus spread between people when a nail technician performed services in customers homes, going against current regulations. He said giving the option for people do their work in regulated environments will hopefully discourage other such incidents.

The health unit in North Bay Parry Sound did not immediately respond to request for comment on Thursday.

The North Bay area had relatively few COVID-19 cases until earlier this month, when virus variants were detected in a cluster of cases at an apartment building.

The region's top doctor has said he asked the province for more time under strict health orders to control the spread of the contagious variants.

Ontario reported 1,038 new cases of COVID-19 on Thursday and 44 more deaths linked to the virus.

- with files from Shawn Jeffords

A man walks past a mural in Toronto on Monday January 11, 2021. THE CANADIAN PRESS/Frank Gunn