Ford government to appeal court's decision to strike down Bill 124

The Ontario government intends to appeal a court's decision that struck down a controversial bill that limited wages for public sector workers.

A spokesperson for the Attorney General told CP24 that "we are reviewing the decision. Our intention is to appeal."

“The Charter protects not just the right to associate but also the right to a meaningful process in which unions can put on the table those issues that are of concern to workers and have them discussed in good faith,” Koehnen said.

Several unions and workers affected by the bill have been fighting the legislation that came into effect in 2019 and capped wage increases to one per cent a year for three years.

The government had said the bill was a time-limited approach to help eliminate the province’s deficit.

Last September, groups representing thousands of public sector employees went to court to fight the constitutionality of the bill.

The groups argued the bill violates a section of the Canadian Charter of Rights and Freedoms that protects meaningful collective bargaining.

The province, however, argued the bill does not interfere with the groups' ability to bargain for job security, benefits and seniority.

After a long battle to get to today’s decision, Registered Nurses' Association of Ontario CEO Doris Grinspun said she is urging Premier Doug Ford not to appeal.

"Please do not appeal, premier, to the court's decision. You know the situation in Ontario and with the shortage of workers everywhere, and in particular in the health-care field. And more so even in nursing. Please do not, do not appeal the bill," Grinspun told CP24.

Interim leader of the Liberal Party of Ontario, John Fraser, agreed that the government shouldn’t appeal and instead should work with unions to come to an agreement.

"The government shouldn't appeal this ruling. It should just sit down with all the workers affected and come to a fair deal," he told reporters at Queen's Park.

Both the Green Party and the NDP also released statements calling on Ford not to appeal today’s decision.

In response to the decision, Unifor, Canada’s largest private sector union, tweeted it will be "seeking remedies for affected members.”

Meanwhile, The Elementary Teachers’ Federation of Ontario said in a statement that it continues to engage in the central bargaining process with the government, the Ontario Public School Boards’ Association, and the Council of Trustees’ Associations.

Ontario court strikes down #Bill124. @fordnation’s wage restraint law unconstitutionally removed workers’ rights when the government imposed a 1% wage cap, even through the pandemic.
Public sector workers need a raise, and Unifor will be seeking remedies for affected members.

The court’s decision comes after frontline health-care workers held a rally outside of Toronto’s Sunnybrook Hospital Tuesday afternoon to continue their fight for better wages and more staffing to address the ongoing hospital crisis across the province.

“It's been a long three years…We've been overworked and it's been constant. We've been short. You know, it's been tough,” Operating Room Assistant Sherica Washington said.

Workers could be heard chanting “kill that bill” and waving flags and signs that said “Respect us. Protect us. Pay us.” 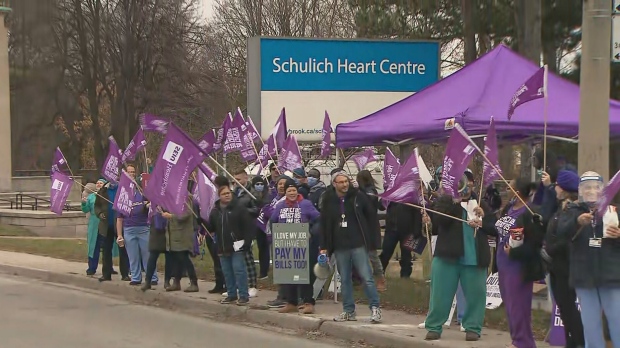 SEIU Healthcare organized the protest to reiterate their calls for action against Bill 124.

“I just think we need some respect. Like a 24-cent an hour raise after what we've been through over COVID, these last three years have been horrible. And they're saying they're going to give us 24 cents. Come on,” Paul Johnson, a personal support worker, told CP24.

Union leaders spoke at the rally and urged the government to scrap the bill so the union could negotiate fair compensation for their members.

“Remember when Ford called you heroes? What does he do? His government introduces and passes Bill 124, which now keeps you from getting that hero’s pay and squashes your ability to bargain fairly,” SEIU Executive Vice President Mina Amrith said.

In addition, the SEIU and other affected unions said the bill should be repealed now as it is contributing to a severe nursing shortage.

“Everyone has been cut back. People are leaving in droves. The patients don't have the care they’re supposed to have with less of us there,” Registered Practical Nurse Tanya Rahim-Juttlah said.

“You can only take so much. Everyone has a breaking point. Every single health–care worker here is at a breaking point and people are deciding should I stay? Should I go?” she added.

The SEIU is also calling on the government to boost frontline staffing to address increased wait times, and to invest new funding in public hospitals and restrict the use of private health-care.

According to the SEIU, recent reports say Sunnybrook Health Sciences Centre had the second-longest wait times, followed by the Hospital for Sick Children in Toronto.

“We ain't failing here. It's Doug Ford and his plan that is failing. Each and every one of us, we aren’t treated with respect, the protection and the pay that we deserve and so today we say enough is enough,” Sanjay Thapa, SEIU chief steward, said. 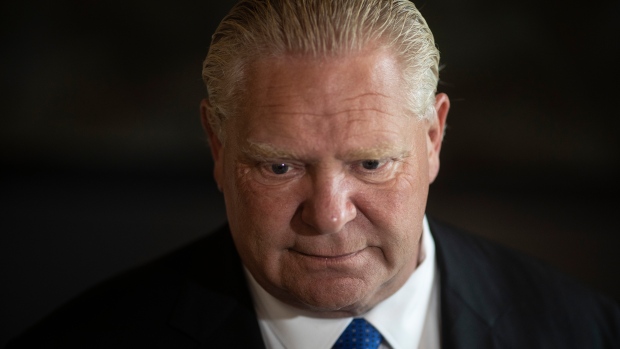 In the past month, several hospitals across the province have been warning patients about increased wait times and some have been cancelling or reducing non-emergent surgeries due to higher demand related to an increase in flu, RSV and COVID-19 cases.

The rally comes almost a week after the leaders from five of Ontario’s largest health-care unions, including SEIU, issued an appeal to the Doug Ford government saying that their plan is “failing miserably.”

The Ontario government has said it will add up to 6,000 more health-care workers and free up 2,500 hospital beds as part of its plan to stabilize the health-care system that was released in August.

The plan also included an investment in private clinics that can offer OHIP-covered surgeries, and legislation that would free up acute care beds by transferring seniors to long-term care homes, which will not be of their choosing.

Nurses and their supporters protest against Ontario's Bill 124 on the sidewalk in front of the constituency office of PC MPP for Ottawa West-Nepean Jeremy Roberts in Ottawa, on Friday, March 4, 2022. THE CANADIAN PRESS/Justin Tang