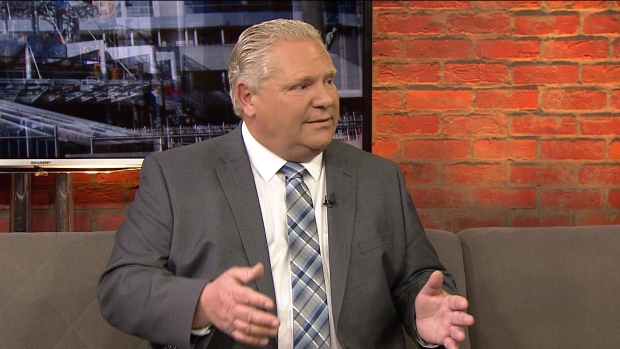 Premier Doug Ford continued to insist no teachers will lose their jobs ahead of the next school year as several hundred teachers in the GTA sit on surplus lists, and said worried teachers will be phoning him up and thanking him by September.

In a sit-down interview with CP24 Wednesday, Ford said his government will ensure all 3,475 teaching positions his latest budget eliminated will be cut through attrition, dismissing the concerns that abnormally high numbers of teachers were given notices that their jobs are surplus to requirements.

“No teacher is going to lose their job – I’ve said it 1000 times. I am so excited for September because all these teachers have been calling me promised they would call me back and thank me for making sure they don’t lose their job.”

Ford says reports from Toronto, where nearly 1,000 public school teachers were handed surplus notices, and Peel, where 369 teachers were given the alerts, are just examples of fearmongering from teachers’ unions who have always opposed the government of the day.

Union officials have said it is uncommon for so many teachers to be put on surplus notice, which does not lay off a teacher but alerts them that they may not have a permanent job for the following school year.

Ford reiterated that those on surplus lists will be safe because the government has set aside $1.6 billion for “attrition protection” allowing school boards to keep teachers declared surplus who are not yet eligible for retirement.

“No teacher will lose their job. We put $1.6 billion to the side to support all of the teachers to make sure nobody is getting let go,” he said.

The unions have already held one mass demonstration at Queen’s Park back in April and continue to say Ford’s increases to class size caps will negatively impact the classroom experience.

Ford also said his government increased education funding more than any of his predecessors.

“We increased education by $700M, more than any government in the history of Ontario.”

While the education budget in 2019 is larger than it was at any point in history, the $700 million increase is not the largest increase it has ever received in one year.

Between 2017 and 2018, the Wynne government increased public education funding by $900 million.