Ford names new cabinet, with Jones as health minister and a role for his nephew

TORONTO - Ontario Premier Doug Ford leaned heavily on experience Friday in announcing a new cabinet that keeps many ministers in their old roles, including key files of housing and education - though with a notable exception of appointing his own nephew to an executive council post.

Ford's 30-person cabinet, including seven women, will have former solicitor general Sylvia Jones serving as health minister. She will also serve as deputy premier in a government that Ford said he hopes can represent everyone and unite Ontario. 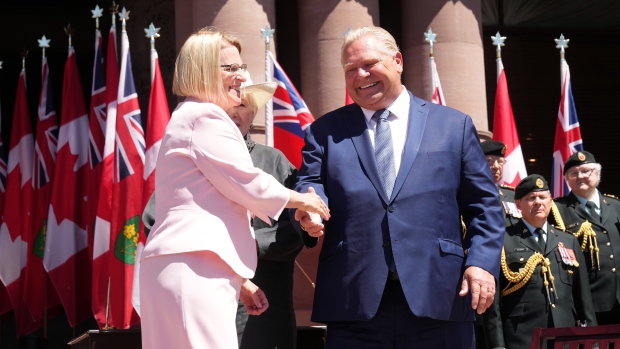 “Our blue collar workers, our labour unions, entrepreneurs and innovators, drivers and transit riders, seniors and young families, newcomers looking for good work and the Ontario dream, urban, suburban and rural communities in every region of the province, this is Team Ontario,” he told a large crowd of his invited guests at the outdoor swearing-in ceremony at the Ontario legislature.

“Big challenges lay on the horizon across Canada and around the world. Inflation is driving up the cost of living to levels we haven't seen in decades and with an uncertain global economic climate, we're competing against other jurisdictions for every job and for every dollar of investment. But when we stand together, when we unite, we're absolutely unstoppable.”

Many of the cabinet ministers remain in the same portfolios they held during Ford's last government, such as Stephen Lecce in education, Peter Bethlenfalvy as minister of finance, and Caroline Mulroney in transportation.

“It's got some tough issues that it wants to address and wants to move fast,” said Ras, a longtime Conservative. “Having some experienced hands around the table helps them do that.”

Most of the changes involve tweaking and renaming roles, though they send strong signals that some of the premier's top priorities are housing, mining and infrastructure.

Ras said that while some of the changes are subtle, they are important, such as renaming the “women's issues” portfolio to “women's social and economic opportunity.”

Jones will be handling the largest ministry, and at a key time - the province is still dealing with the COVID-19 pandemic and its effects on the health system, and Ford has promised billions in spending to build new hospital projects across the province.

Lecce will have to begin work almost immediately on bargaining with teachers and education workers, whose contracts expire Aug. 31. The last round was contentious, in part due to legislation that capped compensation increases for public sector workers.

The Elementary Teachers' Federation of Ontario said while experience matters, it's more important to have an education minister who values the role of educators and adequately funded public education.

“Moving forward, ETFO is hoping to see a change in approach,” it said in a statement.

Housing was a priority that Ford singled out in his speech, and Steve Clark - remaining as municipal affairs and housing minister - will have the daunting task of getting municipalities on board with policy changes, such as new zoning rules, to increase supply and meet Ford's stated target of building 1.5 million homes in 10 years.

Ford also created a new position of associate minister of housing, promoting former backbencher Michael Parsa into cabinet to serve in the role.

There are some other new faces in cabinet, including Ford's nephew Michael Ford, who is named minister of citizenship and multiculturalism.

“There are plenty of people, people of colour in Ford's caucus, that could take that position and he chose to appoint his nephew,” Burch said.

“As we all know, the qualifications there are dubious.”

Michael Ford served as a Toronto city councillor for several years prior to the provincial election.

RELATED: This is who's in and who's out of Doug Ford's cabinet

Mining is another area in which Ford plans to focus, appointing a single person to oversee the file, rather than having it as part of a ministry along with northern development, natural resources and forestry. George Pirie, the former mayor of Timmins who won the seat in that city after the NDP held it for 32 years, will now be minister of mines, with a specific mandate to develop the Ring of Fire.

Ford has touted his critical minerals strategy as a way to use northern resources to be used in manufacturing electric vehicles in the southern part of the province.

Other new members in cabinet include Michael Kerzner, a bioscience and technology entrepreneur elected in York Centre named Solicitor General, Graydon Smith, the former mayor of Bracebridge, Ont., who will serve as minister of natural resources and forestry, and Charmaine Williams, will be Ford's first cabinet minister from the Black community and serve in the new position of associate minister of women's social and economic opportunity.

As well, Neil Lumsden, a former Canadian Football League player who won the longtime NDP seat of Hamilton East-Stoney Creek, is named as minister of tourism, culture and sport.

He replaces Lisa MacLeod in that portfolio, who is one of only a handful of people to be dropped from cabinet.

MacLeod released a statement shortly after the cabinet was sworn in saying she was “taking a breather” from representing her Ottawa-area riding of Nepean, based on advice from her doctor.

“The last couple of years have been difficult for many people,” she wrote. “I know I am not alone in this regard. In my case, my mental and physical health and well-being has been greatly impacted...I need some time to rest and recuperate.”

MacLeod has spoked publicly in the past about challenges with her mental health. Her removal from cabinet comes after two demotions, including after she angered members of the autism community with a program overhaul they said would leave thousands of children without the supports they need. 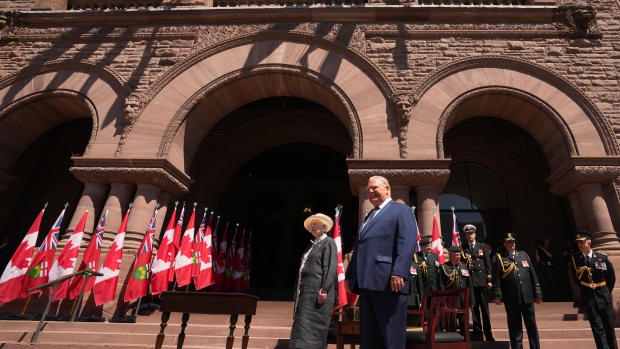 Merrilee Fullerton will stay in the children, community and social services portfolio, which includes navigating the autism file. A handful of people from the autism community stood on the lawn of the legislature just beyond the outdoor swearing-in ceremony to protest the growing wait list for services.

Several other ministries have been tweaked, or have had mandates added. Prabmeet Sarkaria remains as Treasury Board president, but with an expanded mandate for emergency management and procurement. Kinga Surma stays on as minister of infrastructure, but with an additional mandate for government real estate.

Kaleed Rasheed is promoted from associate minister of digital government to the newly created portfolio of minister of public and business service delivery, which is intended to cover some of the work of the previous Ministry of Government and Consumer Services. That ministry has been broken up with its responsibilities divided to a few other ministries.