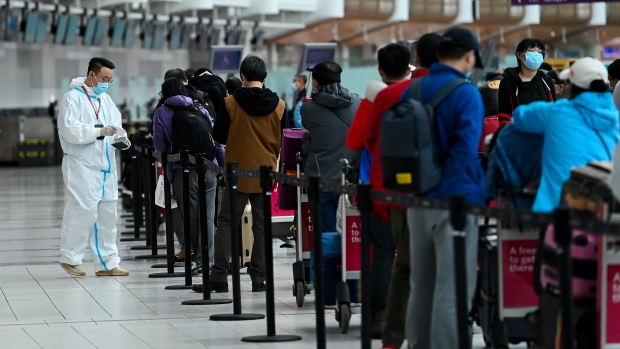 People line up and check in for an international flight at Pearson International airport during the COVID-19 pandemic in Toronto on Wednesday, Oct. 14, 2020. THE CANADIAN PRESS/Nathan Denette

Hours after the Alberta government announced a pilot project that would allow international travellers to forgo the federally mandated two-week quarantine period for a rapid COVID-19 test, Ontario’s premier says he’s interested in doing the same.

”I've been talking to Premier Kenny about it and when he had the conversation with the other premiers, and the prime minister, we're keeping a really sharp eye on what's going to happen out in Calgary on this pilot project and I'd be open to it,” Premier Ford said Thursday, while making a separate announcement on legislation amendments to accelerate the construction of various infrastructure projects across the province.

The pilot project was developed in partnership with the federal government and Canada’s travel industry and is set to begin in November at both Calgary International Airport and the Coutts border crossing.

According to the Alberta government, international travellers will receive a COVID-19 test when entering Canada before entering into quarantine. If the test comes back negative, those travellers will be allowed to leave quarantine and will have to take another test six or seven days after their initial arrival.

The program is not mandatory, however those who choose not to participate will be subject to the 14-day quarantine.

“I've been all over this,” Ford said when asked about the pilot project, but made clear that he would need to wait for the results of the study before commissioning a similar program in Ontario.

“Toronto is much different than Calgary,” he said. “Calgary, it doesn't get the volume, number one, but doesn't get the diversification around the world. Everyone lands in Toronto, you know, so I've been on this from day one of this pandemic we should be testing people right as soon as they get off that plane.”

Much like it’s Calgary counterpart, the Toronto-based study saw 15,000 travellers commit to a rapid test for COVID-19. Of those tests, Air Canada said that over 99 per cent had tested negative.

“We believe that a test-based strategy may be a safe alternative to the 14-day quarantine,” the airline said at the time.

Participants were all volunteers and agreed to be tested upon arrival in Toronto. They were then sent home with two additional testing kits and were taught how to take samples after seven days and then 14 days.

- with files from CTV News staff