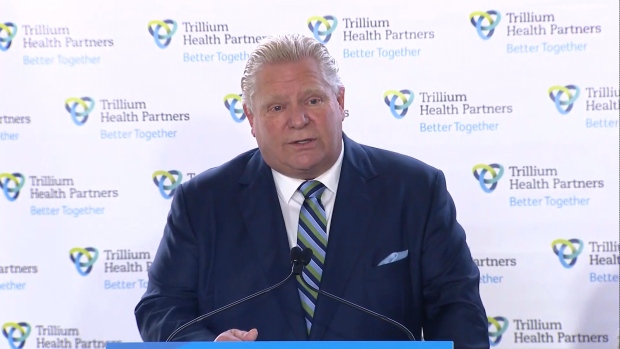 Premier Doug Ford says he plans to have more conversations with the federal government to discuss ways to “tighten up our borders” but stopped short of confirming that he will push to scrap the PCR testing exemption for travellers coming into the country from the United States.

Speaking at a news conference on Wednesday, Ford thanked the federal government for its quick action to implement more travel restrictions in the wake of the Omicron (B.1.1.529) variant, which was officially deemed a variant of concern by the World Health Organization last week.

On Friday, Ottawa announced that Canada would close its borders to foreign nationals with recent travel to South Africa, Mozambique, Botswana, Zimbabwe, Lesotho, Namibia and Eswatini. Egypt, Malawi, and Nigeria were added to the list on Tuesday.

Additionally, the federal government has said all air travellers entering Canada, except for those coming from the United States, must be tested for COVID-19 and will have to isolate until they receive a negative result. The feds have promised to consult with the provinces before implementing similar restrictions on travellers from the U.S.

“As (for) the U.S., we will have further discussions with the federal government and the other premiers and territories as well to get their input because it doesn’t just happen in Ontario, it is right across the border,” Ford told reporters at a news conference in Mississauga on Wednesday.

“I’m glad that we have enhanced the testing at the airports and we have added three additional countries on to the list of travel.”

When pressed for confirmation about whether he wants to see U.S. travellers tested as well, the premier said, “I always support anything that can be cautious to prevent this variant coming into our country.”

“Again, we’ll have a discussion with the federal government. That’s their jurisdiction, not ours. They work collaboratively with all of the provinces and territories. I’m always for going the cautious route,” he said.

“I’m always on the side of being more cautious. It doesn’t take much to get a test at the airport.”

As it stands, Canadians returning home from the United States are not required to present a negative PCR test upon their return.

Fully vaccinated incoming U.S. air and land travellers must present a negative PCR test taken within 72 hours of arrival and a select sample of them are tested again at random if they arrive at an airport.

Dr. Isaac Bogoch, an infectious diseases specialist with Toronto General Hospital, said while increasing testing at the border will help slow down spread of the Omicron variant in Ontario, the federal government has left a “gaping hole” in the plan by excluding the U.S. from the new rule.

“This is not a perfect policy. Obviously there's holes in this policy, but if the goal is to slow down the introduction of the Omicron variant, a policy like that will do that,” he said. “The question is, how much is it going to slow things down? The answer is we don't really know.”

Bogoch noted that banning foreign nationals from select countries “doesn’t do much at all” to prevent the variant from spreading in Canada.

“We know that there's community transmission in many parts of the world with no exposures whatsoever to southern Africa or those other African nations that were added and I just don't see the utility of those measures,” he said.

“It kind of adds to the question, why would anyone want to report their findings if they detect a variant of concern if the response from the world is to limit travel to that area.”

So far, seven COVID-19 cases involving the Omicron variant have been detected in Canada.