Confronted with criticism about his plan to reopen shuttered businesses including indoor dining in regions still struggling with rising and record levels of novel coronavirus infection, Ontario Premier Doug Ford suggested Wednesday that some people criticizing the plan must not have read it.

Ford’s Tuesday announcement that York, Peel and Ottawa will resume gym activities and indoor dining this Saturday as part of a new five-tier program to manage COVID-19 spread comes as one of those regions, Peel, has seen rising levels of infection, test positivity and hospitalization in recent days.

Peel’s recent case growth and test positivity has been so high at times it actually partially qualifies for more restrictions under the new Ontario plan, not less.

Peel’s chief medical officer of health has also said they are struggling to trace the contacts of each case because there are too many of them.

One epidemiologist who spoke to CP24 on Tuesday called the plan “hasty,” saying there is no jurisdictions on earth that has taken on the virus by loosening measures or moving them around each couple of weeks, saying consistency was key.

Presented with that criticism on Wednesday, Ford suggested critics must not have the details in the 20-page PowerPoint slide deck the province released one day earlier.

“Well I am not too sure if they read the whole plan, it's about early intervention to avoid getting to the red zone,” he said. “If there’s smoke, you go in there and you put the fire out, compared to waiting until there’s a big inferno and then you go in and react. This is about early detection and early prevention and then we can act.”

He added “there is always going to be a group” of “armchair quarterbacks” that criticize his government’s plans.

“We’re doing a lot better than a lot of other places in the world and in Canada with exception of the Atlantic provinces,” he said. 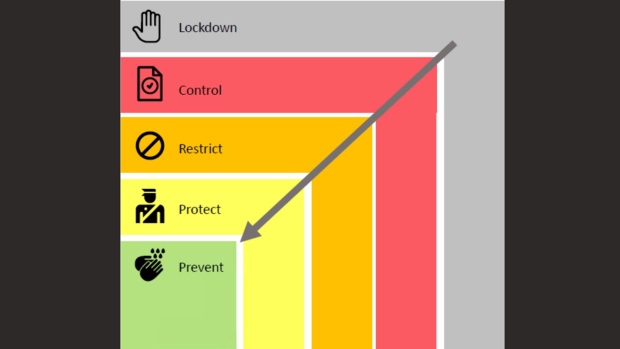 Provincial officials speaking on the plan this week stressed that the indicators that determine how regions will be moved from one level of restrictions to the other, such as cases per 100,000 or test positivity, are just “starting points” and do not necessarily mean more restrictions must be imposed.

Other planks of the new-tiered plan appear not to gel with the latest science concerning aerosolized spread of the virus.

The new plan allows public health regions such as Simcoe-Muskoka or Waterloo Region to allow for karaoke bars to reopen with restrictions, despite their documented risks in super-spreader events all over the world and in Canada.

In gyms in Halton Region, Durham Region and Hamilton, where an indoor cycling class lead to dozens of cases last month, it calls for an additional metre of distancing between patrons, from two metres to three metres, but patrons can continue to keep masks off while exercising.

Associate Chief Medical Officer of Health Dr. Barbara Yaffe told reporters the new tiered plan is about adding “balance” and recognizing that fighting the spread of the virus through lockdowns and restrictions causes knock-on effects on mental health and peoples’ livelihoods.

“Closing businesses for a period has a very severe impact on their mental health and their income and their stability and housing and so on,” she said. “Closing schools and imposing measures on long-term care has very severe impacts on mental and social health.”

“The government is trying to balance control of the disease and the severe impact that can result from measures taken to control the impact of the disease.”

She said the province has not arrived at “a state of acceptance” of recent record-high case counts, and said she would be open to changing plans if cases continue to rise.

“If the numbers are going up, it’s a concern. If we find that there are issues with the framework we will certainly make recommendations to the government.”