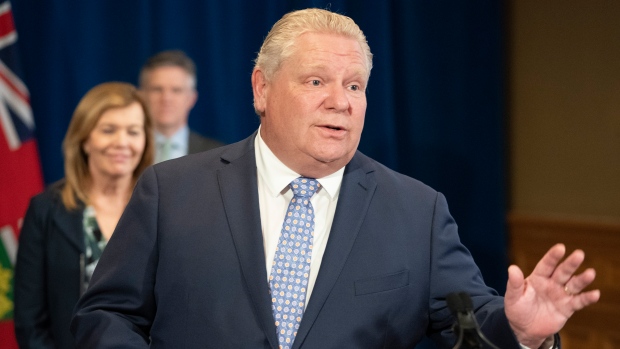 Ontario Premier Doug Ford wishes a happy safe weekend at the end of the daily briefing at Queen's Park in Toronto on Friday, May 1, 2020. THE CANADIAN PRESS/Frank Gunn

Premier Doug Ford says people in the province should stick to gathering with their "immediate family" and not in larger groups "for a little bit longer."

His comments come as he was questioned about spending Mother's Day this past weekend with his four daughters, two of whom do not reside with him.

"The girls came over. There was six of us, direct family. None of the husbands, boyfriends, no one came. Just themselves," he said at a news conference at Queen's Park on Monday afternoon.

"I'd keep with the immediate family. That would be my recommendation. I wouldn't get into the big gatherings. If we had our whole family, you'd have 30 some odd people. It just can't happen."

As part of the province’s emergency orders, Ontario residents have been asked not to gather in groups larger than five. This order does not apply to households with five or more people.

Ontario’s Chief Medical Officer Dr. David Williams said he had not heard what Ford described of his gathering.

“We’re just asking people in general outside your unit whatever that is – you can still have visitation while you’re trying to represent that physical distancing in that sense there even it’s in the same geographical area,” Williams said, suggesting visits where a two metre distance could be maintained at all times.

He later said it remains the Ministry of Health’s recommendation that people do not gather in groups larger than five.

“Yes that’s been our recommendation – you have a unit, they can go out together.  Outside of that, we haven’t opened that up yet.”

Ford said that people should "use their best judgment" when it comes to visiting older parents.

"If you have an elderly mother or father and their health isn't great, I wouldn't chance it," Ford said.

The premier said the directive on gatherings could change in the next few weeks or month if the province sees a consistent decline in the number of new cases and hospitalizations.

"(It's) just for a little bit longer and I appreciate everyone's cooperation with that. That's the reason... we were able to see results because of the great job everyone in the province is doing," he said.

Ford said advice on the size of gatherings and the reopening the province is coming from the province's chief medical officer of health.

"I think if we can keep it to as small as possible gatherings, that would be very helpful," he said. "I really trust the judgment of the people of Ontario."

Those numbers are down dramatically from the record high 640 new cases that were recorded on April 25.

"We’ve come a long way," Ford said on Monday. "These numbers are good sign that we are going in the right direction."