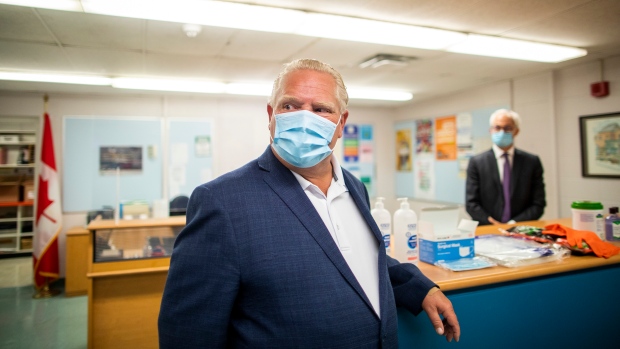 Ontario Premier Doug Ford takes a tour of Kensington Community School to see the measures implemented as students return to school amidst the COVID-19 pandemic on Tuesday, September 1, 2020. THE CANADIAN PRESS/Carlos Osorio

Ontario’s largest school board says that it was given no advance notice of the province’s plan to allow “outdoor graduation ceremonies” and does not know what “may be possible” given current public health restrictions.

During a press conference on Wednesday, Premier Doug Ford officially announced that schools would remain closed for in-person learning until the fall while simultaneously indicating that he would still like to see them permitted to “host in-person, outdoor graduation events” so that students can “reconnect outside before the end of the year.”

The announcement caught many by surprise, including the Toronto District School Board.

In an email sent to parents on Wednesday afternoon, the TDSB said that it just learned of the proposal for outdoor graduation ceremonies today and is “now awaiting further information from the province on parameters for outdoor gatherings, along with guidance from Toronto Public Health, prior to making any decision on these events.”

The first stage of the province’s reopening plan, which will begin by June 14, only permits outdoor gatherings of up to 10 people. But a spokesperson for Ford’s office did confirm to CP24 that the government is “looking at the necessary amendments” to the reopening plan in order to allow school boards to hold outdoor graduation ceremonies.

The change could theoretically lump graduations in with religious services, rites and ceremonies which will be permitted outdoors so long as two metres of physical distancing can be maintained.

“At this point in time, we do not know what may be possible with regard to offering short, outdoor graduation celebrations as discussed during today’s government announcement,” the TDSB said in its email to parents. “As soon as more information is available, we will provide another update.”

Ford said on Wednesday that his government would like to see schools host outdoor graduation ceremonies “for all students in all grades” and will be working with school boards and health officials to make it happen.

However, it remains unclear whether schools will be able to put together small, outdoor ceremonies on such short notice.

In a message posted to Twitter folllowing Ford's remarks, Toronto Catholic District School Board Trustee Norm Di Pasquale said that virtual graduation plans have now been underway for weeks and that boards weren’t consulted about the change.

He said that it would “be very hard to throw all that prep work away” and be ready in time for an outdoor graduation ceremony at this point “to say nothing of how our local public health unit would feel about this.”

NDP Leader Andrea Horwath also slammed the idea while speaking with reporters at Queen’s Park, calling it a “off the cuff announcement with no plan and nothing to back it up.”

“I think it is very frustrating for everybody in this province when the premier pulls stuff out of his hat from nowhere and I think that is what has happened again today,” she said. “It creates confusion, it creates a sense of not knowing what to expect and what comes next and that is a huge disservice to the school boards and to the school leadership but also to parents who are not going to be able to shed any light for their kids who might hear about this and get excited.”