Mayor Rob Ford is enrolled in a rehabilitation facility that is “nowhere close to the GTA,” his councillor brother says.

Doug Ford made the comment to reporters late Wednesday afternoon as speculation over the mayor’s precise whereabouts intensified following reports that he was spotted at a coffee shop in the Junction.

“I am just shocked the media is running with this,” Doug Ford said of the reports suggesting Ford remains in Toronto. “You don’t go anywhere with Rob Ford without a hundred people taking pictures.”

Earlier on Wednesday, woman named Cayla Clarkson told CP24 that she saw Rob Ford alone at a Tim Hortons in The Junction on Tuesday morning.

Tim Hortons employees who were working Wednesday afternoon also told CP24 their co-workers served the mayor, but Doug Ford told CP24 that he was at the coffee shop Tuesday morning and was probably the one that the everyone saw.

“I am not saying the young girl is a liar,” he said. “She may have believed she saw Rob. Maybe when Rob is finished treatment this young lady can come down and actually meet him in person.”

After telling Toronto he was taking a personal leave of absence to seek professional help for substance abuse, it appears the city’s embattled mayor hasn’t entirely stopped working, raising questions or doubts about the type of treatment he is apparently receiving.

In an interview with Toronto Sun columnist Joe Warmington, Mayor Rob Ford said he is working the phones in a rehabilitation program that reminds him of football camp.

“I asked for my calls sheets and I am making calls to constituents,” Ford told Warmington in a column published Wednesday. “I am getting help but I still want to help.”

Ford has also had telephone conversations about work or other topics with a handful of councillors. The fact that he is making and receiving calls has led some to question whether he really is in rehab.

His brother, Coun. Doug Ford, insists the mayor is getting help and he is taking it seriously.

“He has private time that he can make calls,” Doug Ford told reporters at city hall. “That’s what Rob likes doing.”

In response to an alleged sighting of the mayor in the community, he said his brother is not enrolled in an outpatient clinic and is committed to rehab full-time.

Doug Ford urged reporters to back off, claiming their efforts to locate the mayor are putting the recovery of fellow patients in jeopardy.

“The doctor called me. They asked, ‘Please, tell the media to stop,’” Doug Ford said.

For the second day in a row, Doug Ford refused to put an end to speculation that he would replace his brother on the ballot if the mayor were to drop out of October's mayoral race. Doug Ford offered no comment about such a scenario.

The description of Ford's phone activity contradicts the rules of a typical inpatient treatment program, experts have told CP24.

Dennis Long, executive director of Breakaway Addiction Services, said most short-term residential programs actively discourage people from having contact with the outside world for at least the first two weeks.

“They really want people to focus on their problems. They want to have people in a situation where they’re not distracted or they’re not in any way connected to the people that have been part of the problem,” Long told CP24 reporter Karman Wong.

Long doesn’t know of any programs that would allow a patient to leave.

“It’s not allowed. People are in the program and for the first week or so it’s very intense,” he said.

No timeline for return: mayor

Although there is no timeline for his return, Rob Ford told the Sun his name - not his brother's - will be on the ballot in October’s mayoral election.

“Of course, I am coming back and I am going to kick butt,” Ford told the newspaper.

The mayor told Warmington he is participating in group and individual sessions and he is working out.

“Rehab is amazing. It reminds me of football camp. Kind of like the Washington Redskins camp I went to as a kid,” he said.

Not everyone is convinced Ford is in rehab, however. Some councillors want proof that he is in treatment, as the mayor's exact whereabouts are unknown.

Warmington told CP24 Wednesday morning that Ford did not tell him where he is.

“I did talk to him and he did say he’s in rehab and it sounds like he’s in rehab. Again, we’ll have to take him at his word on it,” the columnist said.

Warmington said he called Ford after learning he had talked to Coun. Denzil Minnan-Wong on Tuesday.

He said Ford expressed “a lot of remorse” about what has happened and he sensed a “different sounding” mayor during their conversation.

“The anger seemed to be peeled away and he seems to be coming to terms with everything that’s happened and not really as much blaming other people but kind of looking at himself,” Warmington said.

“I wanted to make sure that he was OK. He sounded good. I think I woke him up this morning, but he sounded pretty good,” Mammoliti said.

The councillor said an explanation about Ford’s whereabouts may be necessary to put an end to the debate.

It was believed the mayor was in the Chicago area after he flew to the Midwest city on a private jet last Thursday. However, it was revealed Tuesday that he voluntarily withdrew his request to enter the U.S. after speaking to U.S. Customs and Border Protection officers. Ford's plane then departed the airport. It is not known why Ford withdrew the request and turned around.

On April 30, Ford announced he was taking an immediate personal leave of absence after facing questions about new allegations of drug and alcohol use. This came hours after a newspaper published an audio tape where Ford was heard making inappropriate comments about colleagues at a bar on April 28. At the same time, another media outlet published photos of Ford with a pipe. The reporters in that case saw a new video that reportedly shows Ford smoking from a pipe in his sister’s basement. They were told it was taken on April 26.

A self-professed drug dealer, who is trying to sell the video, told the Globe and Mail the mayor was smoking crack cocaine. The newspaper paid $10,000 for a series of screenshots that show Ford holding a pipe.

Ford announced the leave of absence in a written statement that was issued after reporters tried to question him about the new allegations.

In his interview with Warmington that was published Wednesday, Ford claimed the decision to seek help was made April 29, the morning after he was at the bar.

When he faced reporters a day later, Ford did not mention his plans and he said he was looking for tickets for that night's Raptors playoff game. The announcement came a few hours later when the damaging allegations began to surface.

The following morning, three newspapers published the allegations and Ford was last seen leaving his home with Dan Jacobs, his chief of staff, and a suitcase.

Last November, Ford admitted to smoking crack cocaine in a “drunken stupor” after he was dogged by reports about a similar video that has since been recovered by Toronto police during their investigation into the mayor and friend Alexander Lisi.

Neither video has been seen by the public. As part of the ongoing Project Brazen 2 investigation, police are attempting to view the video that was shown to two Globe reporters last week.

Deputy Mayor Norm Kelly has assumed Ford's remaining responsibilities and staff while the mayor is away. After Ford made the crack cocaine admission last year, council voted to strip him of key powers and transfer them to Kelly. 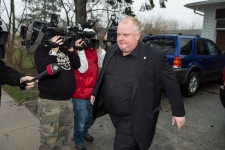 Toronto Mayor Rob Ford leave his home Thursday May 1, 2014, after announcing he would take an immediate leave of absence. (The Canadian Press/Frank Gunn)