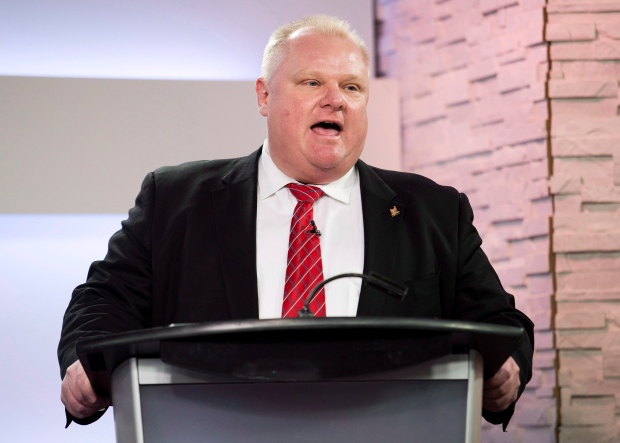 Newly unsealed court documents show there was a flurry of activity by numerous parties to obtain an alleged crack video of Mayor Rob Ford.

On May 17, 2013 alone, police intercepted 50 separate communications about efforts to retrieve the Ford tape, the documents show.

“That’s an astounding number of separate communications on one day,” media lawyer Peter Jacobsen, who argued for the documents’ release, told CP24 Friday.

Other parts of the documents contain information that police overheard Mohamed Siad – the man accused of filming the mayor and attempting to sell the video to the media – saying that he is the only one with the video.

Siad is heard saying that if anyone asks, there is no video. He is also heard discussing the fact that there will be an online story about the video, even though he hadn’t yet given anyone proof.

The wiretaps also show that the now-infamous video may at one point have been stored in a red pencil case.

In a conversation detailed in the ITO, police report hearing Siad instruct a female believed to be his sister to store the cellphone containing the video in a red pencil case. However Siad’s sister told police in a later interview she did not recall the incident.

The new revelations are contained in police documents that were used to obtain search warrants for Project Brazen 2, a police investigation into Mayor Ford and his friend and occasional driver Alexander 'Sandro' Lisi.

Lisi has been charged with extortion in connection with efforts to obtain the video.

The documents were released Friday after media lawyers argued that they would not prejudice the fairness of an eventual trial.

There are no allegations contained in the new documents that Ford tried to obtain the video himself or that Lisi was acting on his behalf, Jacobsen said.

The partially-unsealed documents contain evidence gathered by police and they were filed to obtain access to phone records belonging to Ford, two of his former employees, Tom Beyer and David Price, and others from a period after Feb. 17, 2013.

Feb. 17, 2013 is the day Ford was filmed smoking a substance from a glass pipe in the presence of suspected gang members, the documents say.

Ford, who denied the allegations, admitted last November he had smoked crack cocaine while in office. The admission came after the release of separate documents that contained damaging allegations about drug and alcohol use, impaired driving and associations with suspected gang members and drug dealers.

None of the allegations has been tested or proven in court, and Ford has not been charged with a crime.

Police charged Lisi with drug offences last October - after police conducted weeks of surveillance on him and Ford - and an extortion charge was added later that month. The extortion charge relates to alleged threats in an attempt to retrieve the video after reports surfaced online.